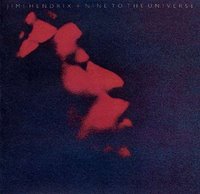 Released in 1980, Nine To The Universe is a virtually all-instrumental album that has never officially been issued on CD and was another in a long line of posthumous releases of Jimi Hendrix's music. Reportedly recorded in the first half of 1969 during the Electricladyland sessions, Nine To The Universe is nothing more than a bunch of informal and spontaneous jams Hendrix undertook with anybody who would play with him at that moment.

The original album had only five tracks yet clocks in at over thirty-eight minutes, a good length for the days of the old 33 1/3 RPM record. In order to make it all fit on one LP over 40 minutes of music was edited from the original sessions. One example is the title cut. It was faded at 8:45 on the album but the full performance stretched out to 18:49.

Hendrix is sensational on this album. Most of his playing is high energy, sometimes bordering on frantic. The best jams are the title cut in which a mean bass riff never relents under Hendrix's manic fretwork and a track simply titled "Young/Hendrix Jam," which runs for 10:22. The latter features some great interplay with Larry Young, a jazz organist who worked with Miles Davis on Bitches Brew. Hendrix is a little more subdued here, allowing Young to share much of the spotlight with him.

Other guests include drummer Buddy Miles and Mitch Mitchell, Hendrix's former drummer with the Experience.

These five pieces were never meant for public consumption. They didn't even have legitimate titles until producer Alan Douglas - who worked on two earlier posthumous Hendrix collections - named them for the release of the album that peaked at only #127 on the Billboard 200 album chart.

Four of the tracks later appeared on other compilation sets unedited for length. "Jimi/Jimmy Jam" and "Drone Blues" can be found on Hear My Music. "Young/Hendrix" is on the box set West Coast Seattle Boy: The Jimi Hendrix Anthology, and "Easy Blues" was included on People, Hell and Angels.
It appears you can still find the original LP at Amazon at collector's prices or several different versions of it at Discogs.
Side 1
Nine to the Universe 8:45
Jimi/Jimmy Jam 8:04
Side 2
Young/Hendrix 10:22
Easy Blues 4:30
Drone Blues 6:16
Buried Treasure Classic Rock Instrumental Jimi Hendrix