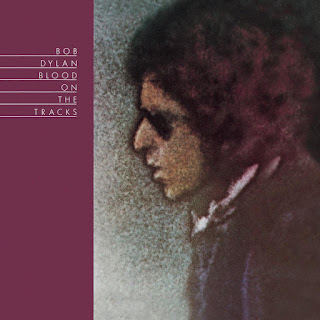 There is no need here to discuss Bob Dylan as a musician or as a legend. Plenty has been written about him for more than half a century by people way more qualified than me.
Yes, Dylan is rock's second most influential act after The Beatles but despite all of the accolades he's received the man has never been a top player on the singles charts. While the singer-songwriter, who just celebrated his 80th birthday a couple of weeks ago, has had his share of hits, being a highly successful singles act is not what he is known for, nor is it what he ever aspired to be.
Deservedly, Dylan's Blood On The Tracks is one of his most celebrated albums, and one of that record's most beloved songs is the minor hit single, "Tangled Up In Blue," the classic LP's opening track. Sadly, it never climbed higher than #31 on Billboard's Top 100 in 1975 even though Rolling Stone Magazine later listed it at #68 on their list of all time great songs.
Dylan had recently separated from his wife, Sara, and he also just completed his major comeback tour with The Band when he wrote the song during the summer of 1974. Jakob Dylan - the son of Sara and Bob who has maintained a successful musical career of his own with The Wallflowers and as a solo act - has said the song is "my parents talking" about their impending divorce. Critics and fans alike have praised it as one of Dylan's great lyrical conquests.
In addition to the attention this song received for its lyrics it also possesses one of Dylan's more accessible melodies. When combined with a vocal performance that goes down easier than much of his singing on his very early, solo acoustic recordings we have a song that quickly achieved status as one of the native Minnesotan's all-time classics.
Dylan's brother, David Zimmerman was the uncredited producer of the single.
Even after the record's release Dylan often changed the song's lyrics and arrangement when playing it live, which according to Wikipedia he has done 1,685 times through 2018. Below is one of those performances.
______________________________________
Almost Hits is an occasional exploration into songs that failed to reach the top 20 on the American Billboard Hot 100. Many have become classics despite what their chart position would indicate.
Almost Hits Bob Dylan Classic Rock Folk Singer-Songwriter