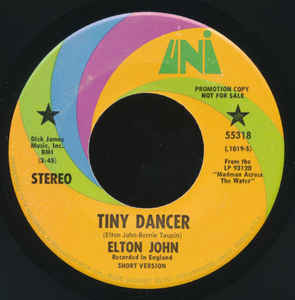 Believe it or not "Tiny Dancer" is another out-of-this-world, classic rock single that never broke into the top twenty in America even though it's one of Elton John's greatest songs. It never got higher than #41 on Billboard's Hot 100 in 1972, but it's a highlight of the 1971 Madman Across The Water LP. It fared better in Canada (#19) and Australia (#13). It was never released on a 45 RPM record in England.
Despite its modest run on the pop chart, by 2018 "Tiny Dancer" was certified platinum three times over by the Recording Industry Association of America and it placed at #397 on Rolling Stone's 2010 list of the greatest songs of all time.

During John's early years Bernie Taupin was his go-to lyricist. He wrote the words to "Tiny Dancer" following his first visit to the USA in 1970. His goal was to capture the heart and soul of early 70s California. Taupin was entranced by the women he met there because they were so different from the ladies he knew back home in England.

Taupin revealed more about the song to Rolling Stone Magazine in a statement that can also be found on American Songwriter. “We came to California in the fall of 1970 and it seemed like sunshine just radiated from the populace,” Taupin said. “I guess I was trying to capture the spirit of that time, encapsulated by the women we met, especially at the clothes stores and restaurants and bars all up and down the Sunset Strip. They were these free spirits, sexy, all hip-huggers and lacy blouses, very ethereal the way they moved.”

“They were just so different from what I’d been used to in England,” Taupin continued. “They had this thing about embroidering your clothes. They wanted to sew patches on your jeans. They mothered you and slept with you. It was the perfect Oedipal complex.”

"Tiny Dancer" contains references to Maxine Feibelman who was soon to be Taupin's wife. She was the "seamstress for the band" who traveled with them to repair and maintain their wardrobe while on the road. Feibelman is also the ballerina Taupin referred to in the song and John also credits her for steering him toward the outrageous stage outfits he began wearing in the not too distant future. On the LP, the song is dedicated "with love to Maxine."

"Tiny Dancer's" length contributed to its less than stellar chart position. At 6:12, it initially had trouble receiving airplay and took several years to become the classic it is today. The truncated single, at 3:45, just didn't have the same impact as the full album cut. Also, there were radio stations that banned it because of the line "Jesus Freaks, Out in the streets."

The arrangement opens with some pedal steel guitar and features both strings and a choir. They give the track a much more lush sound than most Taupin - John songs had at the time.