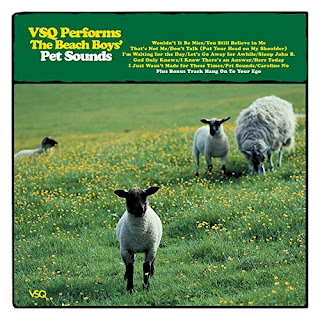 CMH Label Group, the independent record company that has issued dozens of string quartet tribute albums under the moniker Vitamin String Quartet (VSQ) has covered artists as diverse as Slayer, Enya, Bon Jovi, Oasis, Warren Zevon, Bjork, Radiohead, Rush, Fleetwood Mac, and more. Even more recently they've released albums covering Lana Del Rey, Sigur Ros, Lady Gaga, Coldplay, and Kanye West.
Tom Tally, a producer of over 50 VSQ albums described VSQ's mission on Wikipedia. "Vitamin String Quartet is about applying rock n' roll attitude to classical technique."
Back in 2005 VSQ was responsible for a nice reworking of The Beach Boys' 1966 classic, Pet Sounds. I can't envision either string quartet fans or Slayer fans listening to classical arrangements of that band's work, but Pet Sounds is music that easily lends itself to a classical treatment.
Despite the limitations of using only three string players and a percussionist the quartet's sparse arrangements reveal the beauty of Brian Wilson's work. The central themes of many Beach Boys songs were often buried under their gorgeous harmonies and his Spectorian wall of sound, but more than anything else what one notices most about this disc is the Californian's gift for writing captivating melodies. This set can never be compared to Pet Sounds in any way as a perfect aural listening experience, but classical music fans and those looking for some quiet background music may find it more than satisfying.

Earlier versions of this CD, my copy included, were issued under the name of The Angry String Orchestra. Some were released as The Angry String Quartet, and all of them used the same album art. People who are familiar with the original Pet Sounds artwork and graphics are sure to notice the similarities between the two album covers.

VSQ uses a rotating lineup of producers, arrangers and players. On this CD they are David Keen on violin and viola, Deborah Assael on cello, and Michael Goetz on double bass. Percussionist Doug Munro also served as producer and arranger of this set.

See Vitamin String Quartet's website for a complete catalog of their current releases. You can buy this album on mp3 or CD from Amazon.