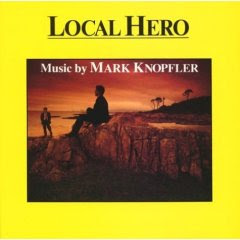 I was a Dire Straits fan from the very beginning. Their first single "Sultans of Swing," from their debut album released in 1978, knocked me off of my feet. The band's third and fourth albums, Making Movies (1980) and Love Over Gold (1982), were among the best rock records I heard in the 80s. Both were big hits in the U. K. and America. I have to admit I was a little smug when the rest of the world suddenly discovered the band a few years later with "Money for Nothing" from their 1985 album Brothers In Arms. I said to myself, "This album is good but you haven't any idea what you missed."

As much as I liked Dire Straits I was totally blown away with Knopfler's first venture away from the band. He was commissioned to compose, arrange, produce, and perform the score for the quirky John Forsyth movie, Local Hero. The accompanying soundtrack album is both my favorite movie soundtrack and my favorite instrumental album of all time.

The movie is an eccentric comedy about an American oil company who wants to buy an entire Scottish fishing village so they can build a refinery. Most of the movie was shot in a rural Northern Scotland coastal village and the music fits the film's personality perfectly.

The soundtrack has a little bit of jazz, a little country, a little folk music, and some tracks, especially those with the crashing of ocean waves, have a new age feel to them. Superb guest musicians such as Tony Levin on bass, Mike Brecker on sax, Mike Mainieri on vibes, as well as most of the members of Dire Straits, make great contributions. Drummers include Terry Williams of Rockpile fame and the stellar Steve Jordan. Gerry Rafferty, famous for "Baker Street" and Stuck In The Middle With You," contributed the vocals on the only non-instrumental track, "The Way It Always Starts."

The highlight of this marvelous soundtrack is the gorgeous melody that is the central theme of the album. The tune appears on four separate tracks with a different arrangement on each. The first one, "Wild Theme" is almost a solo acoustic piece starring Knopfler's gentle guitar. The second rendition, "The Ceilidh & The Northern Lights," is played by The Acetones, a Scottish folk band. Then Straits member Alan Clark simulates the beautiful Celtic tin whistle on his keyboard with Knopfler strumming behind him on "Whistle Theme." Finally, there is the most famous version, "Going Home (Theme of the Local Hero)," the one Dire Straits often used to close their concerts. This rock band arrangement, led by Brecker's saxophone, is played over the closing credits of the film. In any context it is the most memorable melody Knopfler ever wrote.

For those of you who haven't heard the main theme before here are two samples for your listening enjoyment. The first one is from a 2005 Knopfler concert and the second is a Dire Straits performance of "Going Home" live in Sydney in 1986.
Dire Straits Instrumental Mark Knopfler Soundtracks