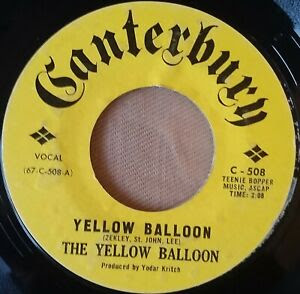 I don't know whether to file "Yellow Balloon," released by the band of the same name, under Buried Treasure or under Almost Hits because both labels easily fit this little ditty by a forgotten "one-hit wonder" quintet.
This slice of Southern California sunshine reached #25 on the Billboard Hot 100 and was from the only LP The Yellow Balloon ever made - and believe it or not - it's still available for purchase on iTunes.
The most interesting piece of trivia about the short-lived outfit was that the late Don Grady (1944 - 2012) was the group's drummer. He was better known for playing Robbie Douglas on My Three Sons and for being a Mouseketeer from 1957 to 1958. For reasons unknown the band sometimes billed him as Luke R. Yoo instead of using his real name.
For a brief time the band's lineup also included Daryl Dragon (1942 - 2019) who later became the captain in The Captain & Tennille.
"Yellow Balloon" is quite typical of the Laurel Canyon and Beach Boys influenced pop of the period. You can tell the record's intended audience even before playing it simply by reading its label that tells us the publishing company is Teenie Bopper Music.
Additional commercial success was not in the group's future and when fresh ideas eluded them they peacefully disbanded. Despite the fact their eponymously named LP had eleven songs their lack of inspiration could be what led the single's flip side to be "Noollab Wolley" which is nothing more than "Yellow Balloon" spelled and played backwards.
I've had this seven incher in my collection of old 45s since it hit the charts way back in 1967 but I'm certain I haven't taken it for a spin in over fifty years. You can listen to both sides of the record below.
______________________________________