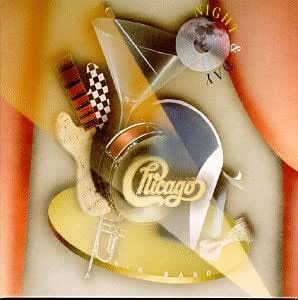 Night & Day: Big Band is the album Chicago released in 1995 two years after the ill-fated Stone of Sisyphus was recorded. When I first discovered it in a record store I immediately thought "OMG, more unnecessary dreck from this formerly great band." Then, a different thought popped into my head. "Hey, because it's a big band CD maybe the Chicago horn section is actually playing a prominent role again," and upon listening I was gratified to learn that their original horn section of James Pankow, Walt Parazaider, and Lee Loughnane were all on board and did a really fine job.

Much of Night & Day is the closest Chicago came to rediscovering their original jazz-rock roots that they completely abandoned in the late 70s. At the same time they managed to sound like the Bill Champlin-Jason Scheff version of the band they evolved into in the 90s but with a new a sense of purpose. While the famous outfit doesn't sound like the vintage Kath-Guercio era it feels like they were having fun for the first time in many, many years.
Even though Chicago sometimes still relied on outsiders in the studio they no longer replaced the band members. Instead, they are special guests used to enhance a song.
On the opening track, "Chicago," they're accompanied by a real big band led by jazz trombonist Bill Watrous. The CD's producer, Bruce Fairbairn, added a trumpet solo. It's a great track led by singer Robert Lamm who fortunately is all over the place on this album. Lamm's singing is no match for Frank Sinatra's but he gets the job done and shows off the versatility in his voice.
Former member Bruce Gaitch handled the guitar work because, as usual, Chicago had trouble replacing Kath. Dawayne Bailey was gone and current, longtime member Keith Howland, was yet to join.
If you are looking for the group to recreate the sound of the era from which these songs came you'll be sadly disappointed. They take Glenn Miller's "In The Mood," and Benny Goodman's "Sing, Sing Sing" and completely remake them, adding lyrics to both. On the latter they received help from flamenco and salsa stars, The Gipsy Kings.
Jade duets with Scheff on "Dream A Little Dream Of Me" that also features "piano stylings by Paul Shaffer" who contributed the liner notes. Champlin takes the lead on "Blues In The Night" with a rocking, guest performance by Aerosmith's Joe Perry.
Duke Ellington is well represented with "Caravan," "Sophisticated Lady," "Don't Get Around Much Anymore," and "Take the "A" Train." The latter closes the album and Lamm really harkens back to Chicago's early years with a loud, rocking, atonal finish that sounds nothing like Chicago the ballad band.
This set of music was Chicago's last decent effort. When they finally made an attempt to embrace their roots the horn-rock vets proved they could still deliver the goods.
Big Bands Buried Treasure Chicago Jazz Rock & Roll