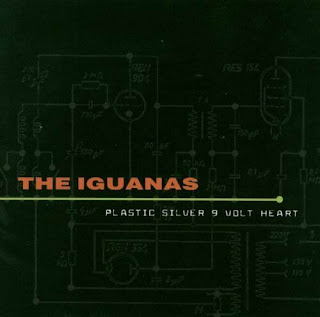 If you're unfamiliar with The Iguanas now is the time for you to become acquainted. The New Orleans quintet has always been a less serious version of Southern California's Los Lobos and unlike their more successful and famous counterparts The Iguanas aren't into politics or social commentary. They're much more of a party band than The Wolves will ever be.

However, Plastic Silver 9 Volt Heart, the group's fifth album, doesn't rock as hard as most party records do. Instead, for most of the set they sound like a low-key bar band with an irreverent attitude.

These NOLA favorite sons manage to start a fire with "Flame On" that features their very cool, trademark, dual saxophone attack with both Joe Cabral and Rene Coman playing in the lower registers. As usual, these two continued to give the group their distinctive sound. "The Liquor Dance" doesn't fully ignite, but the beat is such that I can visualize a bar room full of patrons with their inhibitions hidden swaying to its beat.

The liner notes only offer printed lyrics for the three tracks sung in Spanish: "Machete Y Maiz," "Abandando" and "Un Avion." All are printed in both Spanish and English. I thank the band for that because I would be lost without them even though printed lyrics aren't always necessary for a band of The Iguanas' ilk. If you're looking for poetry you'll  need to go elsewhere, but if you want a good time you've come to the right place.

Catch The Iguanas act on stage if you can because they're even better live than in the studio.