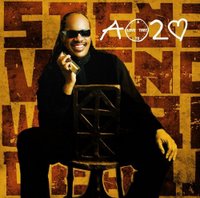 Those of you who saw the movie High Fidelity may recall the moment when Barry, played hysterically by Jack Black, destroyed Stevie Wonder’s 1980s music and humiliated a customer who came in to the used record store where he worked asking for a copy of the Motown star's huge 80s hit, "I Just Called To Say I Love You" for his daughter. It was a very funny scene based around a music snob's opinion that Wonder's 80s and 90s music doesn't compare favorably with his seventies output. Despite the laughs generated from Barry's outburst, Wonder's career is not one that should be made light of because even his lesser 80s music is still head and shoulders above the work of most other artists.

I don't believe I'm exaggerating at all by stating that Wonder's albums, beginning with 1970's Where I'm Coming From and continuing through 1980's Hotter Than July, earned him a place as one of the top five artists of the entire decade. After that, his work began to slip a little due to his extensive use of synthesizers and drum machines. The often grating electronics turned him into a one man band that bleached some of the color out of his music.

Wonder's music has always contained multiple personalities. Like Paul McCartney, his love songs always possessed beautiful melodies even if his lyrics sometimes leaned toward greeting card sentimentality. His funky side and his soulful, political and social commentary have always offered a biting edge.

In 2005, Motown’s most talented artist finally returned after a ten year hiatus with A Time To Love, Wonder's freshest and best work since Hotter Than July. The album is a great combination of every style the great one has to offer. There are more love songs ("Moon Blue," "Sweetest Somebody I know," and "From The Bottom Of My Heart") than social commentary and funky stuff ("So What The Fuss" and the uplifting "Positivity") but it is all very well done. Wonder is an instrumental virtuoso who gets more varied and original sounds out of his array of keyboards and electronics than most prog-rockers. He still played most instruments himself but he also used a band again on many tracks which may be the reason A Time To Love sounds more like his older, eclectic, 70s self. His vocals are still as strong as they were forty years ago.

Guest vocalists include India.Arie and Wonder’s daughter, Aisha Morris, who was the crying baby on, and the subject of, "Isn't She Lovely." Instrumental guest stars include Prince, Bonnie Raitt, Paul McCartney, and Hubert Laws.

This is Wonder's last full length album and it's a set of music so good that Jack Black's Barry needs to shut up now.