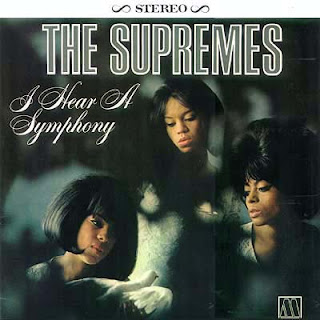 As part of Black History Month my original intent was to feature Motown founder Berry Gordy - the person most responsible for bringing black pop music into the mainstream of American life during the 1960s - but sadness has interfered with my plans. Unfortunately, the news broke today that Mary Wilson, one of the three original Supremes who rose to stardom with Florence Ballard and Diana Ross, has passed away at age 76.
When I was growing up my true musical loves were the British invasion and Gordy's perennial hit factory. I loved The Supremes almost as much as The Beatles. I bought almost every one of the Detroit stars' 45 RPM singles featuring the original lineup whose run ended after "Reflections" became a hit in 1967.
During the years the trio was at the height of their popularity they were easily the most popular female recording artists in the world, placing twelve #1 singles on the Billboard Hot 100.
I won't go into great detail about the group's history because it's been well documented many times over. Most fans know that Ross was the lead singer on their hits but that didn't mean Wilson and Ballard were without talent. Ballard was the original lead singer, but Berry, who exerted tight control on all Motown acts, replaced her with Ross for reasons both musical and personal.
Wilson became the longest tenured Supreme of the original three. Ballard left first under a heavy cloud and Ross departed in 1970 for a solo career. Wilson stayed until 1977 when the group disbanded. During those post-Ross years she sometimes took over as lead singer.
Wilson had a powerful voice. It was naturally more blues and R&B oriented than Ross's and that could be one of the reasons the latter was chosen as the frontwoman. Her voice was smoother and sexier than Wilson's and we all know Gordy's goal was to make Motown "The Sound Of Young America" - as many of their albums advertised  - rather than just the voice of urban or Black America.
Wilson continued to record and perform but she only recorded two solo studio albums: her eponymous  debut in 1979 for Motown and Walk the Line for another label in 1992. In 2006 she released a DVD, Mary Wilson Live at The Sands, and 2007 saw the release of Up Close: Live in San Francisco, a live CD/DVD.
Below is my favorite Supremes song, the superb "I Hear A Symphony," from 1965, on which the label's outstanding house band, The Funk Brothers, also starred. It's followed by proof of the power in Wilson's voice with a live performance on Arsenio Hall's show of the title track from her second CD.