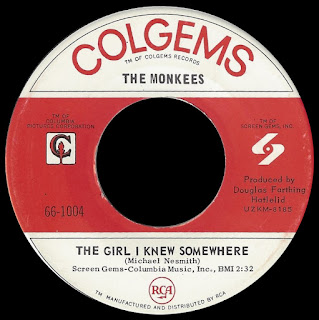 Neither of the tracks appeared on Headquarters, The Monkees third LP, even though both songs were released in support of it. I wasn't able to discover why they were left off of the original disc. "Girl" did not appear on any full length album until it was released years later on several Monkees compilation discs and as a bonus track on the 1996 CD release of Headquarters.

Two versions were recorded. The first one had composer Mike Nesmith on lead vocals and a second take - the one Colgems Records eventually released - featured the quartet's best singer, Mickey Dolenz, as the frontman.

After a long and tense battle with Don Kirshner - primarily led by Nesmith - The Monkees eventually won the right to play on their own records and "The Girl I Knew Somewhere" was the first song they recorded together as a real band. The tussle with Kirshner, who totally controlled the band's music, resulted in his dismissal.

"The Girl I Knew Somewhere" became a minor hit, reaching #39 on the Hot 100. My local top 40 station, WFIL, Famous 56 only played the a-side so I was never familiar with the song until many years later.

The video below, most likely from The Monkees' hit TV series, featured actress Julie Newmar.