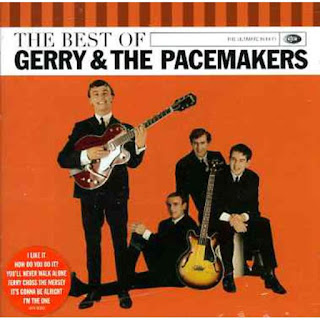 Gerry Marsden, leader of Gerry & The Pacemakers passed away today at age 78.

The Pacemakers were one of many British Invasion bands that quickly followed The Beatles stateside after the Fab Four hit it big in America. They Liverpool group was the second act signed by The Beatles' manager, Brian Epstein.

Marsden was a pleasant singer and the focal point of the quartet. They had some talent and rivaled The Beatles in popularity for awhile in their hometown, but after late 1965 they stopped having hits and broke up a year later.

Unlike both The Rolling Stones and The Animals, The Pacemakers - like Hermans' Hermits - resided in the non-threatening side of the Invasion. Most of their best known American hits were ballads that featured string sections that often drowned out the band behind Marsden's vocals, but one of the rockers has an interesting backstory.

"How Do You Do It" was a song written by an English songwriter named Mitch Murray. The Beatles' producer, George Martin, was also working with Marsden's group. He offered the song to The Fabs first but they hated it. Martin told them that if they could come up with something better for their second single he would not make them release the version they already recorded. Well, not surprisingly, John Lennon and Paul McCartney brought in "Please Please Me" which became their first #1, so Martin gave "How Do You Do It" to The Pacemakers who took it to #9 in America a year after it hit #1 in Britain.

After the Pacemakers Marsden appeared on stage in London's West End theater district. He also did some TV work and later organized another version of his once famous band.