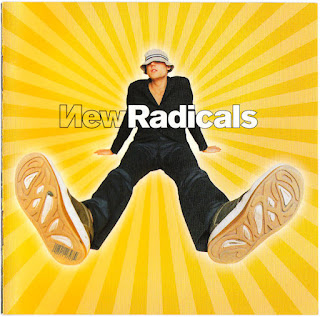 Gregg Alexander's mostly forgotten band, New Radicals, barely lasted two years. He disbanded it in 1999 so he could concentrate on writing and producing for other artists.
The alternative rock group's best known song was their first single, "You Get What You Give." It peaked at #36 on the US Hot 100 but was a much bigger hit elsewhere in the English speaking world. It was also the highest charting song from New Radicals' only album, Maybe You've Been Brainwashed Too.

The song has been been praised by Joni Michell, rapper Ice-T, and U2's The Edge. Mitchell said in the liner notes to her 2004 compilation album, Artist's Choice, that "You Get What You Give" is "rising from the swamp of 'McMusic' like a flower of hope." It is high praise indeed when a compliment comes from someone of Mitchell's stature.

The song's closing lyrics became quite controversial.  According to Wikipedia, Alexander "wrote this section for the song as a test to see whether the media would focus on the important political issues of the first few lines or the petty celebrity-dissing. As suspected, a considerable amount of press began to appear about the name-dropping and the other political issues were largely ignored."
In addition, Marilyn Manson was not happy that he was mentioned in the same line as Courtney Love. To that I have to say "tough."
"Health insurance, rip-off lying
FDA, big bankers buying
Fake computer crashes dining
Cloning while they're multiplying
Fashion shoots with Beck and Hanson,
Courtney Love and Marilyn Manson
You're all fakes, run to your mansions
Come around, we'll kick your ass in."
I had totally forgotten about New Radicals and "You Get What You Give." I've only been reminded of the song now because it was used to introduce Doug Imhoff, the husband of Vice-President Kamala Harris, at President Biden's recent inauguration. The made for radio song is also a favorite of the Biden family and its lyrics were used as part of the eulogy at the funeral of Beau Biden, the chief executive's son.
Alexander got the band back together after twenty-two years just to play the song at the inaugural and he told Rolling Stone it was an honor.
The only other permanent member of the original lineup was Danielle Brisebois who at one time was better known for portraying Stephanie Mills, the Jewish daughter of Edith Bunker's step cousin, during the latter days of All In the Family and its spinoff, Archie Bunker's Place.
_____________________________
Almost Hits is an occasional exploration into songs that failed to reach the top #20 on the American Billboard Hot 100. Many have become classics despite what their chart position would indicate.
Almost Hits Rock 'n Roll