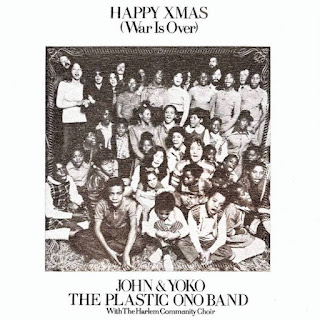 Sadly, John Lennon was assassinated forty years ago today and it was a shock to both music lovers and the rest of the world.
It's true that the controversial Liverpool native was a massive contradiction. As a very young man he possessed a mile wide violent streak that he was able to suppress to a great extent as he got older. As Lennon matured he worked hard to promote world peace - frequently utilizing extremely eccentric public events - and outside of his great music that's how many people remember him.
"Happy Xmas (War Is Over)" is a Christmas plea for peace during the war in Viet Nam that Lennon composed with Yoko Ono. On the classic record the couple was supported vocally by The Harlem Community Choir - a group that included thirty children.
The original single has become a holiday standard. But now, there is an alternate version. It's a stripped down production featuring a crystal clear vocal by Ono without the choir backing her and - to the surprise of many - she sings way better than anyone who is familiar with her vocals has a right to expect.
This new, all acoustic track was issued as part of Gimme Some Truth, a box set that was released in several formats this past summer in honor of Lennon's 80th birthday.
Due to its late release during the 1971 holiday season the original 45 RPM only reached #42 on the Billboard Hot 100. However, consistent airplay in subsequent years contributed to it becoming a perennial holiday favorite.
Finally, I realize that the abbreviated way Christmas is spelled in the song title is offensive to some people. I apologize for its usage and I only posted it that way because that is how the song title appears on official releases.
Merry Christmas and Happy New Year from Bloggerhythms!
Christmas Classic Rock John Lennon