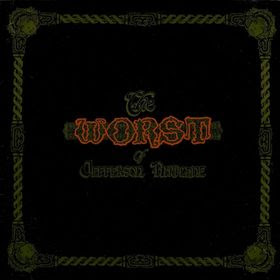 This is the first entry in an occasional series in which Bloggerhythms will feature some interesting greatest hits or "best of" compilations. Today's initial post is about Jefferson Airplane, a group that may only be a distant memory to many baby boomers.
The Worst Of Jefferson Airplane is a fifteen song, single LP or CD with a great title that covers most of the group's best songs and biggest hits from their inception in 1965 through the end of the decade when their classic lineup started to disintegrate.
This anthology covers the psychedelic, San Francisco band's first five studio albums and one live record. It went platinum and reached #12 on Billboard's album chart in 1971.
The Airplane only had two top 40 hit hits: "Somebody to Love" (#5) and "White Rabbit" (#8). They are both here along with a few other notable singles - "The Ballad of You & Me & Pooneil" (#42), "Volunteers" (#65), and "Crown of Creation" (#64) - that were less successful on Billboard's Hot 100. "Plastic Fantastic Lover" from their live album, Bless Its Pointed Little Head only hit #133. The rest of the songs on this set are either "B" sides or choice album tracks.
Also, there is "We Can Be Together," a now dated political, hippie anthem that is the flip side of "Volunteers." It contains some language that is definitely not radio or kid friendly, but it's a great rocker.
The first CD version of this hits package was issued in 1997 and in 2006 it was released again with two bonus tracks. "Watch Her Ride" and "Greasy Heart."
Sadly, missing from all of these releases is "Wooden Ships," an outstanding anti-war treatise Kantner wrote with David Crosby and Stephen Stills that appears on the Airplane's Volunteers album and the 1969 debut LP Crosby and Stills recorded with Graham Nash. It's absence here is inexplicable. Other than that glaring omission, The Worst of Jefferson Airplane is a very good, single disc retrospective for people who don't own the sextet's albums from their most prolific and vintage years.
Some cool artwork appears on the original, vinyl release. The inside of the gatefold LP cover opens up to reveal a painting of "His Master's Voice" featuring Nipper the dog, the famous RCA Records logo the company used for decades and the record label itself displayed the same logo as it appeared on the company's 78 RPM releases from the late 1920s. It's a really nice and welcome touch that the record company did not use on the initial CD release from 1997.
Longer, more complete collections of Jefferson Airplane's catalog were released during the CD era - most notably the double disc 2400 Fulton Street from 1987 - but if all you need are their biggest and best known songs The Worst Of Jefferson Airplane is an excellent choice from a band that I never tire of listening to.
Classic Rock Compilations His Master's Voice Jefferson Airplane Vinyl Moments