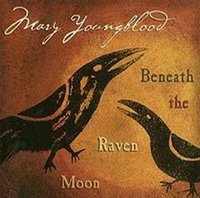 Back in 2006 I discovered that the listening kiosks found in Grand Canyon souvenir stores enticing shoppers to sample their CDs perform their magic very well because I easily succumbed to one of the offerings on their shelves, Beneath The Raven Moon, by Mary Youngblood. This disc isn't something I would normally seek out on my own but the sticker on the wrapper advertising that the CD was a 2003 Grammy Award winner peaked my interest. Youngblood is the first woman to win two of those little statues for "Best Native American Music Album."

Beneath The Raven Moon is an almost totally instrumental album of Native American flute music recorded by a musician who owns 125 different wooden flutes. She plays ten of them just on this CD.

Youngblood, who is half Aleut and half Seminole, is considered to be a master of her instrument. Her composing skills and virtuosity are very much evident. Her very quiet and appealing melodies have a slight jazz influence as well as touches of classical and ambient music. The sound is mostly pleasant, light, and mainstream. If she played a conventional flute the influence of Youngblood's heritage on her music wouldn't even be discussed.

The more accessible tracks such as "Walk With Me" are accompanied by bass and drums and a classical piece, "And We Can Love," has Youngblood accompanied by a string trio of cello, viola, and violin. "Within My Heart" features Youngblood as the sole musician. No accompaniment is needed. The disc also features guitar, dulcimer, zither, mandolin and piano.

Each of the titles of the twelve tracks are a line in a poem Youngblood has written.

Youngblood has several CDs of her music that you can sample and purchase through her website.
Buried Treasure Folk Instrumental