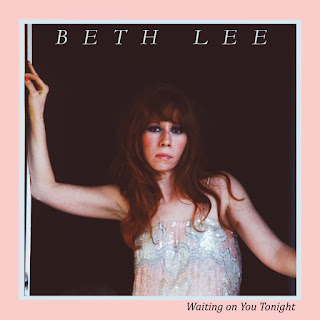 Americana rocker and singer-songwriter Beth Lee last made an album four years ago with her group The Breakups, a name that tells you a lot about the outfit's songs. Now, she is back as a solo artist with Waiting on You Tonight, a rewarding eleven song set produced by Vicente Rodriquez, drummer for Chuck Prophet.
The album will be released on February 12, 2021.
Lee's work has many influences and she specifically sites, Stax-Volt, The Ronettes, The Beach Boys, and the late, great Doug Sahm as well as a more recent one, Nicole Atkins.
Lee appears quite serious on the album's cover and the photo suits the mood of her songs. On the title track she sings, "I don’t care about your lies, cause believe me, honey, I empathize. I don’t care about what you done wrong, cause I know your heart, I knew all along. I don’t know if everything will be alright, I’m just waiting on you tonight."
On "Four Letter Name" Lee talks about what appears to be a dying relationship. "Your arm it reaches less and less. I foretold our last caress that day. You are just a small regret. And yours is just a four letter name."
On "I Won't Give In" Lee sings, "My favorite jeans have faded. The heart on my sleeve has worn thin. I was almost persuaded. But I won’t give in."
Fortunately, the record's full band setting provide the Houston native with a tougher image than her lyrics do. They allow Lee to show her feelings without any heartache. Instead, you root for her to pump her fist in the air and say, "yeah!" She reminds me of Kathleen Edwards with a much stronger set of pipes.
In addition to Rodriquez, James DePrato, another member of Prophet's band, adds guitar. Both are ably assisted by multi-instrumentalist Julie Wolf who has worked with veteran singer-songwriter Ani DiFranco.
Even though Lee is from Texas Waiting On You Tonight is not a country record, it rocks, but not too hard.  In other words, these songs all have a lot of class.
Rock 'n Roll Singer-Songwriters