Grow Old Along With Me: Happy 80th Birthday, John Lennon 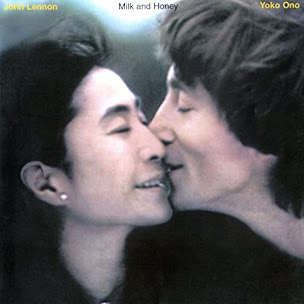 I wanted to say something positive about the always controversial John Lennon because, if he had lived, today would have been his 80th birthday.

So much has been written about the man over the last sixty years that it is hard to produce anything that hasn't already been said. I tried, but this article is the best topic I could come up with for the occasion.

This post is about the last song on Lennon's last album of new, original material, Milk and Honey. "Grow Old Along With Me" was written and recorded around the same time as the rest of that album along with Double Fantasy (the two LPs he made with Yoko Ono) shortly before he died.

The romantic ballad proved that when he was inspired the Beatles' founder could write beautiful love songs that rivaled those of Paul McCartney.

"Grow Old Along With Me" was first recorded as a demo while Lennon was in Bermuda on a vacation without his wife. Ono phoned him to suggest he write a song in response to one the avant garde artist had just completed after she played it for him over the long distance call. Her new song, "Let Me Count The Ways," was about the couple and was inspired by an Elizabeth Barrett Browning poem.

Later, while still in Bermuda, Lennon heard the opening lines of Robert Browning's poem, "Grow old along with me, the best is yet to be" while watching an old movie, A Love Affair: The Eleanor and Lou Gehrig Story, and it served as the inspiration to compose his new song. Upon completing it he called Ono back to play the finished piece for her.

After Lennon returned home several versions were recorded but a finished take was never made due to his tragic passing just a few months later. The raw recording that finally made the posthumously released album in 1984 was a simple one and was done in the couple's bedroom with only the ex-Beatle's voice, a piano, and a rhythm box.

There are two other Beatles related versions of the song. Their producer, George Martin, later added strings for inclusion on a John Lennon box set. Ringo Starr recorded it for his 2019 album, What's My Name, with his friend, McCartney, on bass and backing vocals.