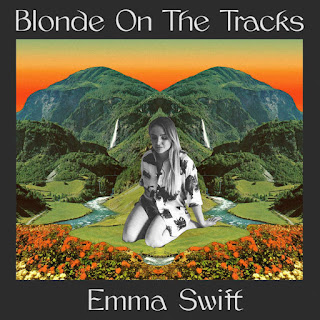 Emma Swift is an Australian singer-songwriter currently living in Nashville with her partner, veteran, English rock n' roller, Robyn Hitchcock.
Swift released her self-titled, debut EP in 2014 and it wasn't until August of this year that she released an eight song set of Bob Dylan covers that is generating a lot of positive press. She cleverly named it Blonde On The Tracks.
I'm not usually one to sit through unappealing vocals but Dylan is one of the few bad singers I can stomach. Even so, it's always rewarding to hear someone with a great set of pipes cover his work. Swift has a strong but feminine voice surrounded by tight folk-rock arrangements that are totally satisfying.
Swift applies an eclectic touch to this record. She didn't always redo the most obvious songs and that's a good thing. Much of Dylan's most loved and famous works have been covered way too often so she decided to keep things fresh. A case in point is a track the revered composer just released this year. "I Contain Multitudes" is from his latest album, Rough and Rowdy Ways. It's the very first re-imagining of that new song and Swift chose it as the featured track from the album.
There are more than a few high points. On "Queen Jane Approximately" the producer, Wilco's Patrick Sansone, adds twelve-string guitar as a salute to The Byrds simply because that great band was once the premier interpreter of the Dylan songbook.
Other standouts include a twelve minute version of "Sad Eyed Lady of The Lowlands," "You're A Big Girl Now," and a superb cover of "Simple Twist of Fate," one of Dylan's greatest efforts. Swift's vocal on this tune from his Blood on the Tracks LP (1975) is simply superb.
Blonde On The Tracks is a quite satisfying collection that Swift mostly recorded in 2017. She finished it up this year as only her second career release due to the COVID-19 lockdown because she was unable to enter a studio to work on her own material.
You can stream the whole record and purchase it in several formats at Swift's Bandcamp page. If you want a copy please buy it from them instead of Spotify, iTunes, or Amazon because, as Swift discusses in an interview with the Los Angeles Times, struggling musicians like her receive a much bigger piece of the pie on units sold with Bandcamp, allowing those who make most of their income on the road to survive while they've lost the ability to tour. The other three mega-sites offer recording artists only a paltry share of the profits. During the interview, she tells Times staff writer, Randall Roberts, that Spotify's CEO, Daniel Ek, is "a morally reprehensible human being."
The Band
Guitar, keyboards, bass, percussion: Patrick Sansone
Guitar: Robyn Hitchcock
Pedal steel: Thayer Serrano
Bass: Jon Estes
Drums and percussion: Jon Radford
Track Listing
Queen Jane Approximately
I Contain Multitudes
One of Us Must Know (Sooner or Later)
Simple Twist of Fate
Sad Eyed Lady of the Lowlands
The Man in Me
Going Going Gone
You're a Big Girl Now
​
Bob Dylan Emma Swift Folk Singer-Songwriters