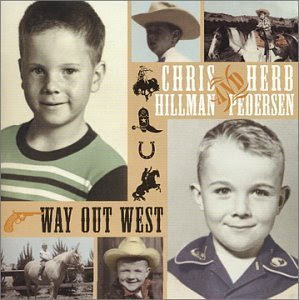 Famous in country-rock circles for decades, both Chris Hillman of the late, great Byrds, Flying Burrito Brothers, and his own Desert Rose Band, and Herb Pedersen - one of Hillman's top sidemen in DRB - share equal billing and space on Way Out West.

This album was a 2002 release that would have made Hillman's fellow Byrd and Burrito, Gram Parsons, proud. The long deceased progenitor of this once popular but now often forgotten genre was even referenced on the advance copy of the CD with the quote, "Perfect for fans of Gram Parsons and the Flying Burrito Brothers." More country than rock, lovers of Poco and early Eagles may find this set a rewarding listen as well. Their label, Back Porch Records, calls this CD "California Country."

Loaded with the required pedal steel guitars, mandolins, banjos and fiddles, Hillman, Pedersen and their band offer up 17 tracks (including three instrumentals) of enjoyable, mid-weight, country-rock. Way Out West was produced by Hillman and includes a supporting cast anchored by the instrumental star of this disc, Jay Dee Maness, the great pedal steel guitarist who played at the two leaders' sides in the Desert Rose Band.

The duo's voices and singing style, whether alone or in harmony, are a perfect fit for these songs. The lyrics are typical of most country-rock. They're about love and its downside as well as laments about what it's like not living life down the straight and narrow path.

Since most of the songs are in the mid- to up-tempo range, and the arrangements are fairly similar, a sameness starts to creep in by the end of the disc. I find myself enjoying this album more when listening to the songs individually or when shuffled in a random mix.

Highlights include a cover of Roger Miller's "Invitation to the Blues," a cover of the old Platters' chestnut "Save the Last Dance for Me" with pedal steel work that would make a listener believe the tune was originally a country song rather than a romantic piece of R&B, and the gospel influenced "The Old Cross Roads." "Our Love Don't Come Easy," more rock-influenced than the rest of the album, adds some color to the set.

You can listen to all seventeen tracks here on YouTube.