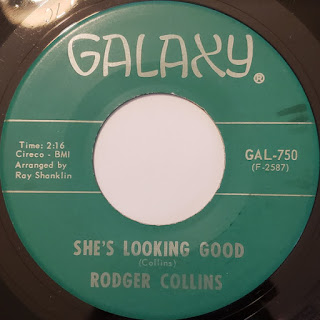 Singer Rodger Collins wrote "She's Looking Good," an R&B barn burner that is nearly forgotten today. It didn't do much on the charts, but fortunately for him a much bigger star, Wilson Pickett, turned it into a top ten smash hit.
The feeling here is that the composer's version is the better one because Collins "sings" more than Pickett does. The latter overdoses on histrionics but that didn't stop the wicked Mr. Pickett from riding the song all the way to #7 on the Hot 100 in May 1968.
The original, short little ditty (2:16) offers a really cool horn chart, a great guitar riff that keeps the sharp arrangement moving, and a vocal style that should have provided Collins with a lot of hits.
"She's Looking Good" was the highest charting song of Collins' career. His version only went to #44 on the Billboard R&B chart while missing the Hot 100 entirely. So, you're forgiven if you've never heard the original before today or believe the song was a product of Memphis and Stax Records instead of emanating from the San Francisco Bay area.
The original 45 RPM was released on Galaxy, a subsidiary of Fantasy Records, a company that produced a lot of jazz records for both Dave Brubeck and Vince Guaraldi. Rock fans probably knew the independent label as the home of the great 60s quartet, Creedence Clearwater Revival.
Believe it or not, David Lee Roth also covered "She's Looking Good." His take is more in tune with Collins' version than Pickett's.
The dynamic Collins opened for Elvis Presley, Ike and Tina Turner, and Joe Tex. He also wrote songs for other performers including bluesman Charles Brown.
Collins later converted to Islam and took the name Rajah Kasim Sabrie.
If you check out his website you'll see that Collins is still working today.
Buried Treasure Rhythm and Blues