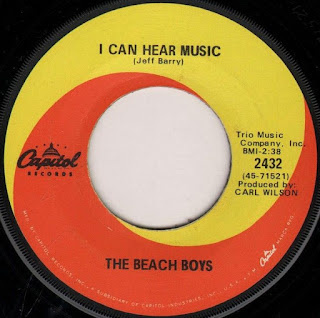 Released as a single in 1969 from 20/20, the Beach Boys' last album for Capitol Records, "I Can Hear Music" is possibly their greatest single of the post-Pet Sounds era and, unusually, it’s not an original. Instead, it’s a cover version written by Phil Spector, Jeff Barry and Ellie Greenwich that barely made it onto the charts for the Ronettes back in 1966.

"I Can Hear Music" is very typical of the more mature sounds that Brian Wilson produced in the mid-1960s as he began to move away from the surfing and fun-in-the-sun fare that made the band famous. The big difference here is that this minor hit was released during the period when Wilson was sinking deeper and deeper into the mental illness that would plague him for most of the next twenty years. As a result he had little or nothing to do with this song, which served as little brother Carl's coming out as the de facto leader of the band.

With this record, Carl proved he was paying very close attention to everything Brian was doing in the studio throughout the the Beach Boys' glory years and the rest of the group was also sending notice that their troubled leader was not the only talent in the band.

The record possessed many of the same devices the So-Cal legends used over the years. Three quarters of the way through the production, after the main tune ended, all of the voices join together in beautiful, multi-part, accapella harmonies before the main theme returned to begin the record's fadeout.

Carl's lead vocal was spectacular. Unfortunately, because 1969 was such an anti-establishment, hard-rocking year, and anything that even hinted at being unhip or part of the establishment was sneered at, the Beach Boys were considered very quaint and out of touch. That could be the reason why this outstanding little opus climbed no higher than No. 24 on Billboard’s Hot 100. It deserved more.


Almost Hits is an occasional exploration into songs that failed to reach the top #20 on the American Billboard Hot 100. Many have become classics despite what their chart position would indicate.
Almost Hits Beach Boys Great Cover Versions