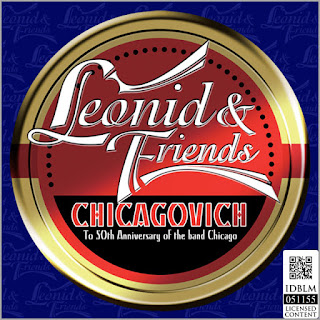 I've never written a single word about tribute bands before today because I've always believed it was tacky to build your entire repertoire by stealing the songbook of old rock acts. Of course, an overabundance of bad, glitzy Elvis impersonators never did anything to change my mind. (The King deserves better).
I've only attended a couple of tribute concerts over the years and they were always local acts playing for free at outdoor summer festivals. I've never gone to one by a highly professional band that earned their living pilfering from others but Leonid & Friends have made me change my mind. If they ever come to the Philadelphia area I'm buying tickets because these crooks are really, really good.
Leonid Vorobyev is the Russian leader of a Chicago tribute band that has eleven singers and musicians that also includes members from Ukraine, Moldova, and Belarus. The group has a woman singer and sometimes a string section when needed.
The famous, 70s rockers have never toured Russia and these talented Eastern Europeans have never seen their idols play live. Leonid & Friends only know about Chicago through the recordings and videos that made them fall in love with the jazz-rock septet's music. On the band's website Vorobyev said "I loved so much the brilliant mixture of rock guitars, drums, and jazz horns with bright vocal harmonies" and that inspired him to start the band in 2014.
In 2019 the large outfit played many sold out shows in America and they have become popular around the world.
While in Los Angeles the band met original Chicago Transit Authority members Robert Lamm and Danny Seraphine as well as Michelle Kath Sinclair, daughter of the late, great Terry Kath. All three gave the thrilled Vorobyev their seal of approval. 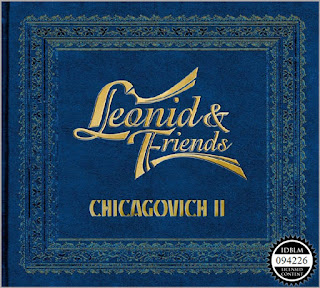 The outfit began their career by shooting a video of  Vorobyev's favorite Chicago song, "Brand New Love Affair." It's from Chicago VIII and is not a track usually known by casual fans. In it's original version it's a perfect example of the pop side of their jazz-rock featuring an excellent R&B vocal by Terry Kath in the first half followed by the fine rock singing of Peter Cetera. Vorobyev copied the entire arrangement down by ear because he did not have access to the score.
Leonid & Friends have recorded two CDs, amusingly and cleverly titled Chicagovich and Chicagovich II. Both albums do an outstanding job of recreating the Chicago sound and are loaded mostly with hits from Kath's tenure with the band. If you're a hardcore fan you probably already have all of these songs in their original form so picking up these albums would probably be redundant, especially when you consider most of the arrangements are very close to how Chicago released them all those years ago.
Conversely, if you're looking to go to a Chicago concert pick up tickets for Leonid & Friends instead because, as the videos below prove, they sound more like Chicago than the official band using that name. You'll save some money too. For instance, a scheduled concert in Northfield, OH next year is currently selling tickets for $27.50 & $37.50 instead of the $59.50 and $79.50 you'll have to lay down to see the only three remaining members of the original group in Nashville this December. If you're going to see a cover band you may as well save yourself a little dough because, currently, with seven additional and replacement members the real Chicago is essentially that, a group of unknowns covering their own songs.
Due to the popularity of their concerts and albums Leonid & Friends have expanded their repertoire to include the works of Earth, Wind & Fire, Blood, Sweat & Tears, and The Ides of March.
You can buy both of their albums and look at more videos at Leonid & Friends' official website.
Chicago Classic Rock Horn Bands Leonid & Friends