Dear Mr. President: My Dad Was Not A Sucker Or A Loser

My blog has always been only about music and I've tried hard to avoid controversial topics, especially politics and religion, unless what I was writing about was somehow related to the music I was discussing at the time. I swore I'd never break that rule but the President's comments trashing our men and women who died in combat have driven me to the edge of madness.
Do not take what follows as an endorsement of either liberal or conservative politics (although those of you who know me are aware of my views). Please look at it only for what it is, a salute to our armed forces.
I promise you I will never get this preachy again.


This is about my father, Vincent Charles Ricci, born in 1911 of two Italian-American, immigrant parents in Brooklyn, NY. He enlisted in the army in 1940 because the navy wouldn't accept him during peace time because he wasn't tall enough. He once told me his goal was to eventually be stationed at Pearl Harbor because that is where he heard the fun was. Who wouldn't want to go to Hawaii, he said. 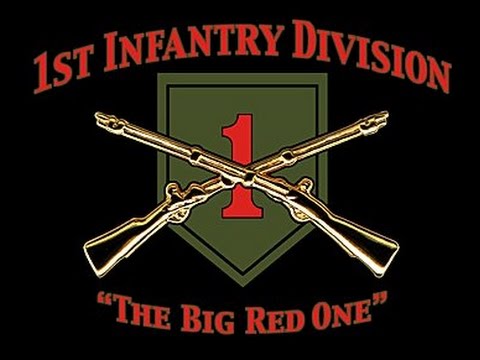 Dad was assigned to the famous 1st Infantry Division, known as The Big Red One. He was shipped to North Africa where he fought against General Erwin Rommel, known as the Desert Fox, one of Adolf Hitler's top military commanders.


My father was considering the service as a career but that possibility ended when he was wounded on Easter Sunday, April 25, 1943. On that day he became a victim of friendly fire in Tunisia. It was American shrapnel that sent him home to have seven operations on his ankle in as many years. Although he could walk, he used a cane because he had a severe, permanent limp. His ankle was so narrow after all of the surgeries that if I put my thumb and middle finger together, end to end, they would be able to completely encircle it.


Corporal Ricci was eventually honorably discharged due to his injuries that also included bad teeth due to the lack of adequate personal hygiene while in combat. He eventually lost all of them and had to wear dentures. In addition, the loud noises of the weaponry used in combat also drastically affected his hearing although he was too proud to wear a hearing aid.

As it turned out my father may have been lucky. The injuries that sent him home may have actually been his way of surviving the war because, after the North Africa campaign, The Big Red One eventually led the bloody assault on Omaha Beach and the just as awful Battle of the Bulge.


As with most men in his situation he talked about army life but never, never, EVER, about the war. Until the day he died of a heart attack at age 58 on August 23, 1970, when I was only seventeen, I knew nothing of his wartime activities. Later, as an adult I discovered that most combat veterans never want to talk about their fighting experiences.


I've always been appreciative of the United States armed forces even though, like most kids growing up in the 60s, I was not in favor of the draft or the war in Viet Nam. My opinions on both subjects have not changed but I've never had anything but the deepest respect for the men and women who sacrificed their careers, families, their bodies and often their lives to keep our country a free democracy.


I didn't know my dad as well as I could have because I was so young when he died and because he was not a man who talked about himself very much. But, I knew him well enough to understand that he was a good man, not a sucker or a loser.

For those of you who believe the current occupant of The White House couldn't possibly have said that the people who died in our wars were suckers and losers just remember what he said about John McCain. His comments about the late senator can be proven so it makes sense he could very easily have said those disgusting things about all of our other military men and women.

Mr. President, my father was one of thousands of men and women who fought, put their lives on hold and even died so you can use your First Amendment rights to say obnoxiously horrible things about them. I would like to think you would appreciate their sacrifices but I know you don't, and to those of you who cheer him on or agree with him, shame on you.


Finally, since this is a music blog let's listen to some music military men and women may appreciate.


"Fortunate Son" - Creedence Clearwater Revival
John Fogerty's 1969 single particularly resonates today. It points out that most of the boys drafted and sent to Viet Nam were from America's working class. They didn't have college deferments or the upper class connections many benefited from to avoid serving in overseas combat.


"Goodnight Saigon" - Billy Joel
For a guy who was never in the service the Piano Man really nailed what life for a marine was like from boot camp to combat on this 1982 album track from The Nylon Curtain.


"The Ballad of The Green Berets" - Staff Sgt. Barry Sadler
This may have been the only song about Viet Nam that celebrated our soldiers. It was sung by a member of our Army's special forces. It went to #1 on the Billboard Hot 100 and stayed there for five weeks in 1966.