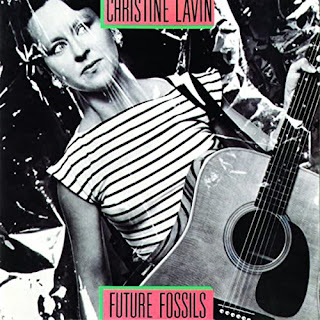 Future Fossils, Christine Lavin's first full-length studio album from 1985, is like all of her later releases. Every CD she issues showcases her fine singing voice and her outstanding comedic edge. All contain several tracks that will have you laughing. A humorous outlook on life is what has gained her an ever-growing cult following over the years and made her a very popular attraction at coffeehouses, auditoriums and summer folk festivals.

You can see the humorous possibilities in song titles such as "Cold Pizza For Breakfast" and "Nobody's Fat in Aspen," in which she asserts that no overweight people are ever allowed in that Colorado ski town. "Don't Ever Call Your Sweetheart By His Name" is about a woman who has had too many boyfriends and is so afraid of calling her current beloved by the wrong name that she only calls him "honey," "sweetie" or some other affectionate nickname.
"Artificial Means" is about seeking self-gratification from an artificial mate when your real one isn't good enough. The song is a scream and is made even more so because Lavin tells the story while keeping it clean (if you can believe that), thereby leaving some of the humor up to your imagination.

Serious subjects do show up in Lavin's work. There is "The Bag Ladies Ball," a spoken word, non-musical poem that tells a story about homeless women who are treated like queens at a local hotel one night a year, then go back out to live on the street. "The Dakota" is a moving tale about the sadness of John Lennon's murder.

Lavin may be doing the same sort of thing year after year but she is so good at what she does that her work never gets stale. This first album is of the same quality and in the same spirit as all of her later and current work.