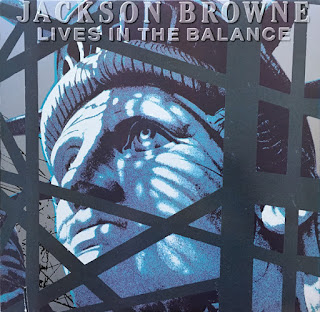 Jackson Browne’s 1986 single "In the Shape of a Heart" was a big hit in certain circles. It went to No. 10 on the adult contemporary chart, but rose to only No. 70 on the Billboard Hot 100. Those stats prove that even though it was a very large cult fourteen years into his recording career the Rock and Roll Hall of Famer was still largely devoid of a mass audience.

Additional proof lies in this story behind the song from the album Lives in the Balance. On the surface "Heart" was one of Browne’s more melodic and mainstream offerings, but lyrically it's a bit heavy for the Top 40. The singer-songwriter said it's about his first wife, Phyllis Major, who took her own life in 1976.

The mostly forgotten tune's sadness is in complete contrast to its moderately paced, bright arrangement. If you’re not listening closely, "Heart" sounds like a typical love song but it's really another example of the deeply personal and sad tone Browne frequently served up on his records. About Major's death Browne sings: "It was the ruby that she wore, on a stand beside the bed; in the hour before dawn, when I knew she was gone."

They are the type of lyrics that make a listener emotional. They also show that despite the controversies surrounding Browne's personal life, he is a man with a lot of feelings. "In the Shape of a Heart" didn't make Browne any new fans, but if you were already in his camp you probably found this minor hit to be right up your alley.