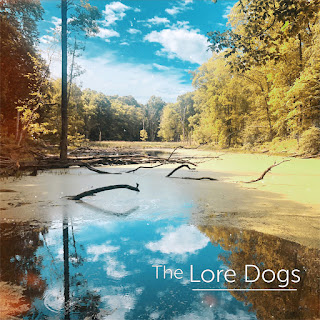 D. B. Rielly has released two full length studio albums and two live EPs under his own name and all of them have been favorably reviewed here.

Currently, Rielly is back with his new duo, The Lore Dogs. He said the name comes from "a penchant for songs that tell stories: tales of love and the human condition; contrasting darkness with light. And, well, we happen to be dog people."

The New Yorker sings and plays guitar, banjo and accordion. His partner, producer/percussionist/violinist, Rohin Khemani, has played in Rielly's band for a long time.

Rielly explained how The Lore Dogs began. "Rohin is my friend and my favorite drummer. He's on both my studio records and plays with me any gig I have unless he's out touring. Last fall, he approached me saying he wanted to get off the road and start his own project and then thought of a duo with me. He pitched me by saying he's always loved my songs and style and wanted to pair it with ethnic instruments to create a different sound. Truthfully, I wouldn't have done it if I couldn't write and play my own songs, or if his production didn't respect what I do. But, in fact, it fulfills all those requirements. Plus, I love that guy and I love his taste. I'm thrilled at how this turned out. I think it's really great. And I don't think this takes away from my solo career at all - if anything, it'll probably help. And finally I will say I love making music and would jump at any chance to do it!"

The singer-songwriter added, "After many years touring the world in bands, we each wanted the simplicity of a duo. Being able to hit the road and take the show anywhere. The space, the freedom, to see where the music would take us and leaving room to have a friend or two join us once in a while."

This eponymously titled release contains only three songs. In addition to a laid back cover of Hank Williams' "Jumbalaya" there are two Rielly originals. "The Devil Showed Up" is a tale of personal faith pushing back hard against evil on which Khemani relies heavily on Eastern instruments such as tabla and djembe along with more familiar percussion such as bass drum, tambourine, and shaker.

"Got A Mind" is a tale of a parent's revenge. Rielly sings,"One night when I was out a man came knocking. He stole my daughter’s innocence and kept right on walking. Policemen caught up with him later that night. They locked him up but that don’t nearly make things right."

D. B. Rielly's work is songwriting at its best and he has a voice that suits his material. I've loved his music since I first heard him a decade ago. The Americana rocker and singer-songwriter continues to be one of  rock's great unknown talents.

You can listen and buy The Lore Dogs' EP from Bandcamp and iTunes.