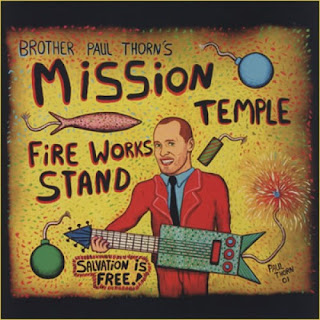 One cannot write about Paul Thorn without including a brief biography because of the rich and varied life the man has led.

Before turning to music full-time, Thorn was a professional boxer who fought Roberto Duran on television. He made chairs for a living. He was a skydiver. His vibrant, offbeat paintings grace his own CD covers. Currently, he is a blues-influenced, rock 'n' rolling, singer-songwriter with a view of the world that is both spiritual and cerebral.

Thorn's father is a Church of God minister and his religious upbringing is apparent on all twelve tracks. Yet most of the songs on his very literate third CD, Mission Temple Fireworks Stand, are not necessarily about a specific religion. Thorn's goal is not to convert his listeners but to make them think. His songs are character studies, most set to a loud, pungent, blues-tinged rock beat.

On "Even Heroes Die," Thorn sings about the warped celebrity status and cult following of Elvis Presley. "Some disappear, they drop out of sight. Some stay too long and get crucified. This world ain't no place to be when you're larger than life. Even heroes die."

On behalf of the subject of "I'm A Lucky Man," a sad story about a man who lives alone in a dirty hotel room and goes to the same bar every night, Thorn sings, "There's always somebody with less. I realize that I'm blessed. Now I understand. I'm a lucky man." Yet, while listening to the song you know the lonely man's statement fools no one, not even himself.

The made-for-radio opening track, "Everybody Looks Good at the Starting Line," tells the listener "You can hit the ground running like you're shot from a gun, but going the distance is the hardest part, son."

The liner notes to the advance copy of the CD accurately describe it as appealing to fans of John Hiatt and Warren Zevon, but Thorn is a better singer than Hiatt, whom he sounds like on the grungy, guitar-oriented rockers. The Zevon comparison is apparent on the slower, smoother ballads.

This album is for people who like both the thought-provoking lyrics of singer-songwriters and loud, rough and raucous sounding rock 'n' roll.