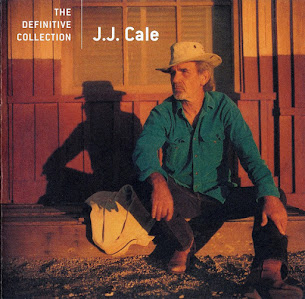 J. J. Cale (1938 -2013) always lived on the fringes of fame so I guess you would have to call him a cult artist. Such is the fate of a lot of musicians who have been large influences on many of the world's most famous stars. That said, I've never known anyone who heard Cale's music and didn't like it.

Cale's The Definitive Collection,  a twenty track, single disc retrospective, includes all three tracks mentioned above plus "Call Me the Breeze" covered by Lynyrd Skynyrd, Johnny Cash, and John Mayer.

What is most appealing about Cale's music is how he could work up a groove without breaking a sweat. If you've heard Dire Straits' early pub-rock records you'll know what I mean. Cale didn't write "Sultans of Swing" but he could have. Matthew Greenwald of AllMusic described Cale's songs as having  a "deceptively laid-back intensity" and I can't think of better words that fit his gimmick free arrangements.

The Definitive Collection should be your place to start if you're not already familiar with the great guitarist from Tulsa, OK. All of Cale's songs on this album were recorded from 1970 through 1983, his best and most prolific years.

After 1984, Cale released a paltry seven albums, including only three this century if you count The Road to Escondido, a joint effort with Clapton, one of his disciples.

You won't usually find Cale on those often controversial lists of great guitarists, probably because he's not flashy enough, but he is an original who plays and sings with taste.

If what you are looking for is rock that won't blow up your eardrums but will still dig deep into your soul the late J. J. Cale is your man.