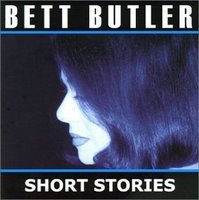 This partially rewritten review was originally published in February 2006. I'm re-posting it now because it only had 38 visitors in all of these years, and some of them were me. That sad fact has nothing to do with the music contained in the album and everything to do with the fact this blog was less than a year old at the time and had yet to build its readership.


This singing and piano-playing lady is full of jazz and R & B influences. There are eleven original tracks, nine of which feature a brass section or horn-playing jazz soloist that displays both Butler's songwriting talent and her ample vocal skills.


The fact that Butler is from the Lone Star State is only apparent on tracks like "Bubba's Inconvenience Store," in which she relates a tale of what happens at a small corner store while waiting for her car to be towed after a hitting an armadillo on a back road, and "Do it Right," which has a nice small-town Texas feel to it without being "country." Both feature very non-Texas-sounding horn sections.


The two hornless entries, "Angels" and "Butterfly" are both "sensitive" singer-songwriter fare with a wholly feminine point of view, but they are not out of place because the arrangements accompanying them do not get bogged down with syrupy strings or sappy instrumentation, and because Butler has a chance to show off her considerable vocal versatility. These tracks require a much higher vocal register than the tougher sounding alto she used on the jazz pieces.


The other songs walk a fine line between R & B and jazz. Nice instrumental flourishes, such as a muted trumpet spiraling around and under Butler's vocal but above the horn section, place "Let's Talk It Over" firmly into the jazz realm. At the same time the track sports a huge sounding bass line that is pushed heavily into the forefront in the manner of classic R & B recordings. You decide which genre the song falls into. It really doesn't matter because quality is quality regardless of its name.


Other highlights include "I Saw You on the Street Today," in which a very blue sounding flugelhorn joins Butler's melancholy voice and lyrics about ending a relationship with a philandering mate, and "A Hundred Tears From Now," a much more upbeat number with a completely different point of view on the same subject.


Short Stories is one of the few jazz recordings that demand the listener pay attention to the lyrics in order to fully enjoy the music. It will appeal mostly to jazz fans but it can still please those with more mainstream tastes. It is a diverse work from a woman who can sing and write well. With a good publicity machine Butler could achieve wide commercial acceptance.