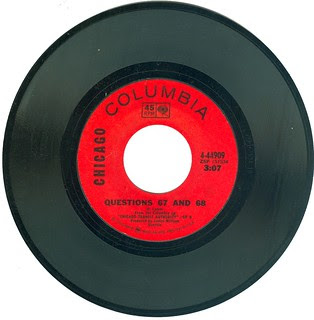 Back when the famous horn-rock band was known as Chicago Transit Authority, they released a top-notch single called "Questions 67 and 68," off of their 1969 eponymously titled debut album. It didn’t do much on the charts, reaching only number No. 71 on the Hot 100.

Later, in 1971, with Chicago firmly ensconced as one of the hottest bands in the galaxy, they edited the original album version of the song down to a length that would please radio programmers and re-released it. This time it reached No. 24 which, at the time, was disappointing for an outfit of Chicago's stature. Perhaps it was because "Questions" wasn't filled with the friendly hooks radio coveted.

"Questions" benefits from a really terrific Jim Pankow horn chart. The three-man section he still leads today opens the song with some inspired Terry Kath guitar work on top. It's immediately followed by an outstanding Peter Cetera vocal with an assist from composer Robert Lamm. The tempo of the medium-paced song picks up considerably during the instrumental break on the LP version. It too features the horns blaring away at full throttle on one of the best jazz-rock passages Chicago ever put on vinyl. Then, the break ends and the arrangement returns to its original theme with Cetera still giving it his all.

The lyrics only mention the song's title once, at the very end. It was allegedly written about one of Lamm's girlfriends who asked way too many questions concerning relationships and commitment.