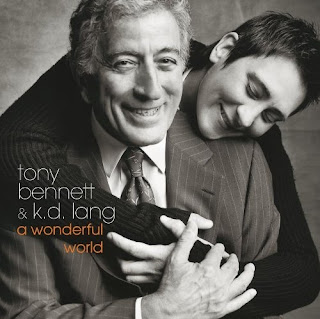 The music world has had a few unlikely pairings over the years. Robert Plant and Alison Krauss immediately come to mind with their 2007 collaboration, Raising Sand. Years earlier, an even more unlikely duo, Bing Crosby and David Bowie, created a Christmas classic from Crosby's last TV special, their adaptation of a "Little Drummer Boy/Peace On Earth."

Tony Bennett and k. d. lang may seem like another odd couple to you but one listen to A Wonderful World will tell you that they belong together. Ms. lang proved that she can also be a talented torch singer after she broadened her repertoire beyond traditional country music.

Bennett and lang first sang together on his MTV Unplugged session and this 2002 album is a result of that very enjoyable program.

Bennett is one of the most talented and revered progenitors of the Great American Songbook. We all know his work and what he does has never changed in over 60 years. On the other hand, the much younger lang has evolved from an excellent but quirky country singer into an eclectic chanteuse who has recorded soundtracks, ballads, and singer-songwriter fare.

These sessions employed Bennett's band with some strings attached. They provided very nice support for the stars' interpretations of songs that many people will tell you have been recorded way too often. While hearing old chestnuts such as "La Vie En Rose, "I'm Confessin' (That I Love You)," "Dream A Little Dream of Me," and the title track again may cause some listeners to say, "enough already" you can tell both singers enjoy these songs and working together. As a result, the performances shine.

Nine of the dozen tracks are duets. Bennett solos on "That's My Dream" and lang takes two turns alone: "A Kiss To Build A Dream On" and "That Lucky Old Sun (Just Rolls Around Heaven All Day).

Louis Armstrong recorded all of these songs over his long career. Supposedly, as hinted by the album's title, the set is a tribute to Satchmo even though it is never mentioned in the liner notes. There is also an uncredited portrait of the great singer and trumpet player in the booklet that was painted by Bennett.