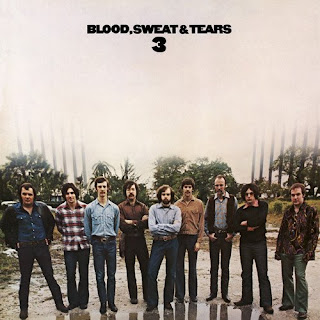 It is not by design that this is the third article I've written about Blood, Sweat & Tears in less than two months. It just kind of worked out that way. For those of you who think that number is too many, please take note, I don't foresee another one coming anytime soon.
Until now, I've never heavily faulted an artist for genuinely heartfelt experimentation even if the attempt failed. That ends now.
Even though it went all the way to number one Blood, Sweat & Tears 3 was neither the artistic success nor the hit its predecessor was. That eponymous second disc went platinum four times.
BS&T 3 had some good moments but based on the song we're about to discuss today it appeared that the popular horn band was trying too hard to be loved by music critics who never really embraced the post-Al Kooper lineup. Was "Symphony for the Devil / Sympathy for the Devil," their brief foray into prog-rock territory, an attempt to impress the right people?
BS&T was often viewed as being too establishment for a number of reasons, most notably for touring Eastern Europe on behalf of the State Department during the Viet Nam era. It was a time when any cooperation with the federal government was viewed with contempt and the band's image suffered because of it.
BS&T opened side two of their 1970 LP with a cover of The Rolling Stones' "Sympathy for the Devil." Introducing the song was a brief, slow, eerie dirge, "Symphony for the Devil," written by keyboard player and arranger Dick Halligan. Then, a drum roll by Bobby Colomby takes us into the main theme that is horribly sung by David Clayton-Thomas.
The arrangement gradually increases in intensity until it reaches a long instrumental section highlighted by an unmelodic sax solo by Fred Lipsius. Next, all the horns join in followed by a crashing gong that cues the whole band to speak the lyrics as part of a fade-in before the low volume instrumental finale.
The record label shows that the "Sympathy" portion of the track was broken down into sections with titles that were just as over the top as the sounds emanating from the grooves.
I - Emergence
a - Fanfare
II -Devil's Game
a - Labyrinth
b- Satan's Dance
c- The Demand
III - Submergence
a - Contemplation
b - Return
Did Blood, Sweat & Tears believe they were actually creating art? Who was their intended audience?  Yoko Ono? The track was pretentiousness for its own sake but I'm sure Keith Richards and Mick Jagger were laughing all the way to the bank because, despite it's failings, the album went gold.
I sold my copy of the LP years ago even though I liked some of it. Unfortunately, I allowed "Symphony for the Devil / Sympathy for the Devil" to ruin the entire record for me.