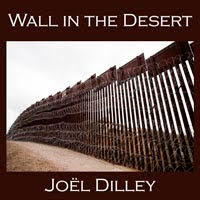 Released this past March, Wall in the Desert is a solo project by jazz bassist Joël Dilley. The San Antonio native played all of the instruments and arranged, recorded, mixed, and produced it himself. It's quite an accomplishment.
The approximately thirty minute soundtrack is part of a documentary of the same name about the notorious and extremely controversial wall along America's Southwestern border.
I have only seen the trailer, not the entire film, so I can only make an educated guess about its message but the music is good enough to stand on its own.
According to an April 2020 press release from Dragon Lady Records, "all proceeds from digital sales and streaming will benefit the Interfaith Welcome Coalition, a faith-based collaborative movement meeting the changing needs of asylum seekers and immigrants at risk."
Wall in the Desert is a different kind of listening experience. If you're looking for hooks, riffs, and memorable melodies you won't find them here. Instead, the soundtrack is comprised of three long, mostly instrumental tracks that lean toward ambient or new age music with a little bit of rock and electronica added for good measure.
The title track opens with an excerpt from Robert F. Kennedy’s address to students at the University of Capetown's Day of Affirmation ceremonies from June 6, 1966 in Capetown, South Africa.

With the music bubbling underneath, RFK's speech is followed by a reading of Emma Lazarus's sonnet,  "The New Colossus." I'm sure you're aware of the latter half of it. A plaque of the famous work is on display at the base of the Statue of Liberty. The ending is "Give me your tired, your poor, Your huddled masses yearning to breathe free, The wretched refuse of your teeming shore. Send these, the homeless, tempest-tost to me, I lift my lamp beside the golden door!" Lazarus's poem is read by Dilley's wife, Bett Butler, who has had three of her own jazz vocal albums reviewed here. The remaining portion of the track is totally instrumental and possesses a propulsive drum beat that keeps it moving. It's the most interesting of the three pieces.

"Border Drifter" is change of pace. One of its highlights is the presence of a mystical and beautiful Native American flute that gives the arrangement a Middle Eastern feel. "Home," the final and longest composition, features Dilley playing a harp.
This is out-of-the-mainstream music for sure but please don't let that stop you from listening to it. It will definitely be worth your time.
Dilley has recorded with Willie Nelson (NICE!) and played with jazz greats Herb Ellis and Arturo Sandoval. He has five previous albums to his credit.
Read more about Wall In The Desert from this brief press release loaded with information and links to several websites you may find interesting.
You can stream and download the whole album at Bandcamp and be sure to visit Joël Dilley's website.
Bett Butler Instrumental Joël Dilley New Age Soundtracks