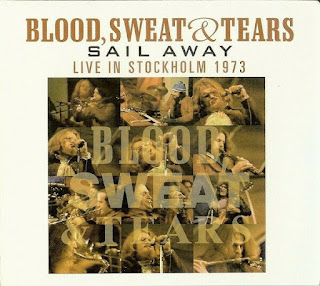 Here is a rarity that I never knew existed until now because it was only a European release. In 2010, Blood, Sweat & Tears (BS&T) issued a new live album, Sail Away, Live in Stockholm 1973, on compact disc. Happily, a digital version came into my hands recently and it's far from what old fans of the band should expect.
This seventy-three minute, single disc set sounds nothing at all like the original, critically acclaimed Al Kooper version of the large band, nor is it at all similar to the popular hitmakers fronted by David Clayton-Thomas on the three albums that immediately followed Kooper's departure.
The lead singer on this twelve song concert CD was Jerry Fisher who replaced Clayton-Thomas.  He sang on the next three studio albums that were all recorded from 1972 to 1974.
Fisher's singing is nothing like Kooper's. His style was closer to that of his immediate predecessor, but he possessed a smoother delivery that appealed to many of  BS&T's fans.
Fisher previously acquired a huge following in Texas where he sang in other groups before joining BS&T and one critic in his home state labeled him as "probably the greatest white blues singer in the business."
When he joined BS&T Fisher wanted to leave their old songs behind and the band readily agreed with his suggestion. As a result, this live show only offers three of BS&T's more popular tunes from earlier incarnations. "God Bless the Child," "And When I Die," and "You've Made Me So Very Happy," are all from their hugely popular second album.
Most of Sail Away is a jazz-rock, fusion concert that should appeal to fans of Chicago Transit Authority and the next few studio albums that the formerly great Windy City septet released from 1969 through 1974. In fact, while listening to Sail Away Chicago was more in my thoughts than BS&T. This performance flat out rocks!
Guitarist Georg Wadenius, like Chicago's Terry Kath, was everywhere and if he challenged BS&T's former axeman, Steve Katz, to a duel he would have definitely blown him off the stage with the very first note. Katz was a tasteful player but unless he was center stage his fretwork was usually buried deep into the mix.
It didn't matter if the horns played as a unified section or took a solo, whether they were jazzing things up or rocking out, they performed at the top of their game. With two trombones, a trumpet, and a sax the section delivered a richer, deeper sound than most rock 'n roll horn sections.
The setlist included lengthy instrumental jams and extended solos, some bordering on the atonal side of jazz. Two tracks, "Snow Queen" and "Maiden Voyage," run a combined eighteen and a half minutes.
One thing that didn't change is that the nine piece unit continued to rely heavily on songwriters from outside the band. However, BS&T didn't just rehash other artists big hits. They made those composers' works entirely their own. Their take on Bob Dylan's "Down In The Flood" rocks hard; Randy Newman's "Sail Away" is no longer an acoustic, piano ballad; and a little known but excellent choice is "Back Up Against The Wall," an obscure Atlanta Rhythm Section rocker that is also the name of their second album.
BS&T has covered Traffic twice previously. They recorded "Smiling Phases" and "40,000 Headman" but in this live setting they spotlight "Empty Pages," a real Steve Winwood classic.
The only obvious negative is the audio quality. While the recording is quite listenable, the sound is a bit compressed. The stereo separation is almost non-existent, and the left channel overwhelms the right side.
Jim Fielder and Bobby Colomby were the only remaining original members who were still in the lineup for the Sweden show. Lew Soloff joined in time for the second LP along with Clayton-Thomas, and Dave Bargeron was added later, beginning with  BS&T 4. Everyone else was relatively new to the scene.
Admittedly, this style of jazz-rock is not for everybody. There isn't much here that is radio friendly in these days of tightly formatted stations but if you want to be adventurous, and you long for the days of free form, rock radio, you should look for this hard to find musical artifact.
Currently, it appears you can only buy Sail Away at inflated collector's prices from both Discogs and Amazon.
The Band
Jerry Fisher - vocals
Georg Wadenius - guitar
Larry Willis - keyboards
Jim Fielder - bass
Bobby Colomby - drums
Lou Marini - saxophone
Dave Bargeron - trombone
Tom Malone - trombone
Lew Soloff - trumpet
Track Listing
1. Almost Sorry (That I Left You)
2. God Bless The Child
3. Back Up Against The Wall
4.You've Made Me So Very Happy
5. Down In The Flood
6. Inner Crisis
7. Sail Away
8. Empty Pages
9. Snow Queen
10. Maiden Voyage
11. And When I Die
12. Over The Hill