It took over a year for my wife and I to clean out my father-in-law's house that was loaded with five decades of possessions he never threw away. It was extremely time consuming.
Just like everyone else we've been stuck at home lately so we decided it's now time to clean out our house. We want to do it now because in the future, when there is possibly only one of us, the survivor will not have to spend more time than necessary getting rid of stuff that is no longer needed or wanted.
We were also inspired to purge, believe it or not, by Ringo Starr.
A few years ago the drummer and his wife decided to sell a lot of his memorabilia including the famous drum kit he used while rising to international superstardom with The Beatles. It was the set you see in hundreds of pictures, the one he used to record many of their early hits. It's the one he played on The Ed Sullivan Show.
I decided that if somebody like Starr, who led an unbelievable life, can unload highly personal items that probably meant a lot to him so can I. After all, as his buddy, John Lennon, sang, "You don't take nothing with you but your soul."
The winning bid for the drums belonged to Beatles fanatic Robert Irsay, owner of the Indianapolis Colts, who bought them for $2.2 million. Some of the proceeds went to charity.
I know this is a very roundabout way to get to John Hammond (1910 - 1987) but cleaning out my basement is how I found a copy of Rolling Stone magazine from August 27, 1987 that included an obituary about the highly regarded executive who worked for Columbia Records for fifty-four years.
It may seem strange to post a tribute to Hammond thirty-three years after his death but because he was a truly astounding talent scout who is largely forgotten today I thought I'd resurrect his memory with a tribute he truly deserves.
Most of the facts posted here are taken from the Rolling Stone article and all of the quotes come directly from it.
Hammond signed a lot of talent for Columbia and is credited with discovering Benny Goodman, Count Basie, Billie Holiday, Aretha Franklin, Bruce Springsteen, and Bob Dylan. He also nurtured the careers of Gene Krupa, Leonard Cohen, Pete Seeger, Bessie Smith, Coleman Hawkins, George Benson, and a host of others. Hammond's last truly masterful discovery was Stevie Ray Vaughan in 1983.
Bob Dylan said that Hammond was a "courageous man" for signing him to Columbia. The iconic singer-songwriter added, "He had faith in others when others didn't have faith in themselves. I had no idea who he was or what he had done when I met him. Obviously a whole lot of people would have never existed as artists without his help. I know I wouldn't. I've always been extremely grateful that John was on Earth when I came down the line."
Producer Paul A. Rothchild was best known for working with The Doors and later Janis Joplin. He said, "The guy was amazing in his ability to view generations other than his own with very clear eyes. That's not an easy trick. Ask any record executive today. He was the best. There's never been a finer talent scout."
Atlantic Records' Jerry Wexler was full of praise too. He said that Hammond possessed an "unerring and decisive ability to instantly recognize exceptional and unique talent." 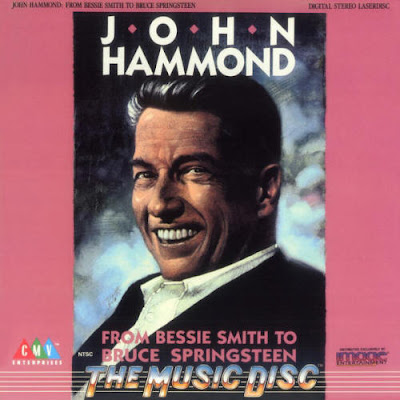 Folk singer Pete Seeger said, that "Jazz became integrated ten years before baseball largely because of John."
Hammond discovered Billie Holiday in 1933 when she was seventeen and Aretha Franklin in 1960 at age eighteen. He introduced African-American, jazz pianist Teddy Wilson to Benny Goodman and the two performed together in Carnegie Hall as part of the big band leader's legendary, integrated, 1938 concert.
Springsteen walked into Hammond's office one day with just his guitar and sang "It's Hard To be A Saint In The City." When he was finished Hammond wore a huge smile on his face and told the New Jersey native, "You've got to be on Columbia." The man who would someday be known as The Boss was astonished. The rest is history.
According to Leonard Cohen, Hammond had "that aristocratic characteristic of not believing there was a higher authority other than his instincts and feelings."
Cohen's comment about Hammond's aristocratic roots was true. He was the son of John Henry Hammond, a senior partner in a major law firm from Manhattan who was also a director of ten corporations. His mother was Emily Vanderbilt Sloan Hammond. The Sloan family became very wealthy in the furniture business and the Vanderbilts were the famous railroad magnates. Hammond Jr. admitted he was raised "as a coddled little rich boy."
Hammond married Goodman's sister, Alice, in 1942. John Paul Hammond, one of his two sons, has a highly successful career as a blues musician.
There are lots of of artists and repertoire men who discovered major talent. Some will find a huge star or two but it is extremely rare that someone could give the world so many artists who could possibly be considered the best of their genres. Hammond had an instinctive ability to find the greatest musicians. Nothing gave him more joy.
Reportedly, Hammond was listening to Holiday's "All of Me" when he passed away.
Due to Hammond's considerable accomplishments he was elected to the Rock n' Roll Hall of Fame as part of its first ever induction class in 1986.