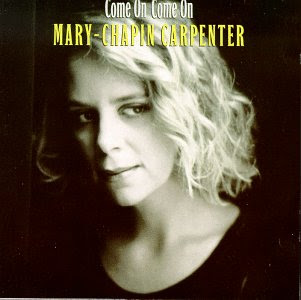 Before we discuss Mary Chapin Carpenter's excellent C'mon C'mon let's explore her family tree because it's very, very interesting and it may help explain her popularity outside the realm of country music.

Carpenter's father was a Life Magazine Executive. She is the fourth great-granddaughter of John Marshall, the fourth Chief Justice of the Supreme Court of the United States who was the longest serving chief justice (1801 - 1835). She is also the eleventh great-granddaughter of Francis Cooke and Richard Warren, who came to America on the Mayflower. The late Harry Chapin and his two brothers, Steve and Tom, all musicians, are her fifth cousins.

C'mon C'mon, Carpenter's fourth album is both her best and biggest seller. Almost three million music lovers purchased copies of the 1992 release that spun off seven hit singles on the country charts, most notably "I Feel Lucky" at #4; a cover of Lucinda Williams' "Passionate Kisses, also #4; "The Bug" (a cover of a Dire Straits song from their last album, On Every Street), #16; and "He Thinks He'll Keep Her," #2.

Although technically a country record, C'mon C'mon won wide praise beyond the stereotypical country music audience. Carpenter's music was aired on college radio, a rarity for the genre, possibly because her pleasant alto voice never possessed any of the twang that has always been a big part of Nashville's DNA and her songwriting went beyond the usual topics traditional country music covered. It also doesn't hurt that she possesses a blue blood family tree and an Ivy League degree from Brown University. It is country music for those folks who are afraid to admit they like country music.

In fact, Carpenter wanted to be categorized as a singer-songwriter rather than a country star even though she name checks Dwight Yoakam and Lyle Lovett on "I Feel Lucky." She also duets with the late Joe Diffie on "Not Too Much to Ask," a single that climbed to #15.

"He Thinks He'll Keep Her" is clever social commentary inspired by the last line of an old Geritol television commercial: "My wife, I think I'll keep her." It's a bit of feisty feminism that would make Loretta Lynn proud but not necessarily those women who expect you to completely "Stand By Your Man" no matter the circumstances. Be sure to watch the advertisement below first before you listen to Carpenter's song.

John Jennings' production gave the set a clean sound that smoothed over any rough edges.

Carpenter has had a long career and she has never made a bad album. There are reasons to listen to every single one of them, but if you only listen to one C'mom C'mon should be your choice.