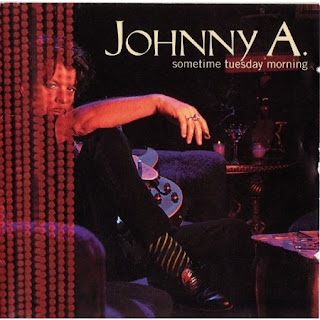 The little known rock guitarist, Johnny A. (John Antonopoulos) is one of the most tasteful axemen to ever pick up the instrument.
Antonopoulos, who hales from Boston, has been a sideman for many established rockers including keyboard player Bobby Whitlock, best known for his work with Derek & the Dominos; percussionist Mingo Lewis of Santana; and for six years, Peter Wolf, the former frontman of the J. Geils band. In 2015 he began a three year stay as guitarist for the Yardbirds.
A. is too good to be a second banana so it's only fair that in 1999 he stepped out on his own with Sometime Tuesday Morning, a sophisticated, all instrumental CD containing twelve tracks including eight originals.
For this unpretentious debut A. works with only two supporting players, Ed Spargo on electric bass and Craig McIntyre on drums.
A.'s virtuosity and versatility is apparent everywhere. The arrangements vary greatly from prog-rock and fusion, to country, from Jeff Beck to Chet Atkins. There is even a little jazz. On four tracks he plays the very cool baritone guitar.
A.'s taste in covers is impeccable. "You Don't Love Me" is a Willie Cobbs blues original, and a rarely covered Beatles song, "Yes It Is," is so smooth and tasteful that it melts in your mouth. An original, "Oh Yeah," climbed to number 1 on AAA radio. Every single track is excellent so purchasing them individually would be shortchanging yourself. Buy the whole album.
In 2004 Antonopoulos released the almost as good Step Inside followed by the less-heralded Driven, a 2014 disc on which A. played every instrument.
I've seen A. in concert four times. If that is something you're unable to do then buy One November Night, a live performance CD/DVD package released in 2010. It is excellent.
I file my CDs alphabetically by artist and then chronologically within each artist's section so Sometime Tuesday Morning holds the distinction of being the very first disc in my collection, making it quite easy to find, and that is a very, very good thing.
Discover a lot more at Johnny A's website.