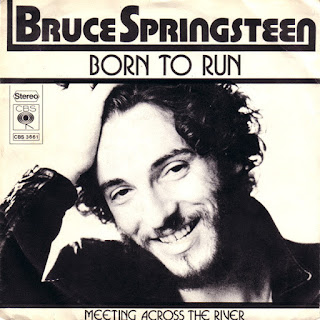 Who would believe it? The title track from Bruce Springsteen's breakthrough album, Born to Run, only reached number 23 on the Billboard Hot 100. I would bet most people assumed it was a number one, or a top five at the very least. In Canada, it only climbed to number 53.
The song was played on both top 40 radio and album rock radio. Today it's one of the staples of the classic rock format where it's often played to the point of exhaustion. Regardless, it made Springsteen's career.
The arrangement is unmistakably based on Phil Spector's wall of sound. It's obvious from the opening notes. I'm sure everyone knows that Springsteen is not the most pleasant vocalist in the world but here, buried under that Spectorian wall, his shortcomings are barely noticeable. The dense, rocking track also included brass and string sections and about a dozen multi-tracked guitars. The instrumental highlights are Danny Federici's glockenspiel and Clarence Clemons' saxophone solo.
The lyrics are another thing entirely. They are pure early Springsteen. The protagonist is either a teenager or young adult who feels imprisoned by his small town life and wants to breakaway. He loves his girlfriend, Wendy, but he wants to hit the road. He asks her to join him but you just know, without him saying so, that if she doesn't he is going to travel the highway to adventure without her.
The song featured an early version of The E Street Band that Steve Van Zandt was yet to join.
"Born to Run" has won many accolades. Rolling Stone ranked it at #21 on their list of the 500 Greatest Songs of All Time and it's one of The Rock n' Roll Hall of Fame's 500 Songs That Shaped Rock n' Roll.
The flip side of the single was another song from the same album, "Meeting Across The River."
_______________________________
Almost Hits is an occasional exploration into songs that failed to reach the top #20 on the American Billboard Hot 100. Many have become classics despite what their chart position would indicate.