May 04, 2020
Five years ago today, on the anniversary of the infamous Kent State shootings, Bloggerhythms posted an article titled Kent State & the Protest Song. However, the post wasn't about what happened on that university's campus on May 4, 1970. Instead, it discussed how protest songs appear to be missing from popular music's current landscape. As today is the 50th anniversary of that controversial tragedy it's time to update the original post with some additional content. 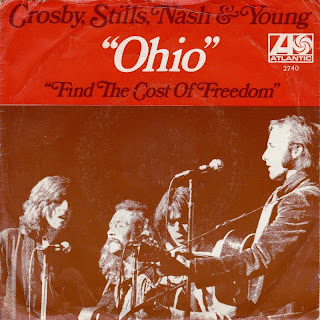 One of the things I miss about music today is the protest song.

Today's rap crap is frequently too full of violent, misogynistic lyrics (OK, you've made a good point, The Rolling Stones' songs were often full of that too).

The current crop of self-absorbed, singer-songwriters, as excellent as many of them are, can not be mistaken for real folk or protest singers even though folk is the genre where a lot of their musical influences were schooled.

It's not that there isn't anything left to say and nobody around to say it. Jackson Browne's latest, 2014's Standing In The Breach, is a very politically and socially aware album.

The dearly departed Celtic-rock band, Black 47, also frequently walked in Browne's territory over their twenty-five year existence. Their final CD, Last Call (also 2014), took on illegal immigration. In 2008 they recorded an entire disc about the war in Iraq and they were important in spreading the word about Ireland's often violent history.

Protest and political songs don't have to be depressing or preachy. Humor is a great way to make a point and gain attention. Arlo Guthrie's "Alice's Restaurant Masacree" is very long but it's also extremely funny while protesting war and the draft. Stevie Wonder recorded a song you could dance to with "Happy Birthday," the last track from Hotter Than July (1980), the last record from his golden era. It was his plea for Martin Luther King's birthday to become a national holiday that he was eventually happy to see become a reality. Both artists, though very different musically, proved lightheartedness can help promote serious goals.

There were more. The almost forgotten Al Stewart educated us about the "Road to Moscow" and George Harrison lead The Beatles on his tirade against the "Taxman."

Peter, Paul, and Mary are finished, Bob Dylan and Joan Baez have grown old, and U2 have abandoned their causes. Where are the new Pete Seegers and Woody Guthries? Some of these activist musicians actually recorded songs with a social conscience that became hits and, over time, popular standards. Seeger wrote the bulk of "Where Have All The Flowers Gone" and Guthrie is famous for "This Land Is Your Land."

The original post was inspired by the 45th anniversary of the tragic incident at Ohio's Kent State University and today's reboot by the 50th commemoration of the unfortunate campus protest that resulted in the deaths of four college students.

The news also prompted Neil Young to write "Ohio," one of rock's great politically charged records. Crosby, Stills, Nash, and Young rode it to number 14 on Billboard's Hot 100 shortly after the event. The flip side of the famous single was a short, Stephen Stills song, "Find the Cost of Freedom," dedicated to those who died in the war in Viet Nam.

Even the Beach Boys, unlikely candidates for social commentary, responded with "Student Demonstration Time" from their 1971 Surf's Up LP. Mike Love updated the lyrics to an old Jerry Leiber and Mike Stoller song, "Riot in Cell Block #9," originally recorded by The Robins in 1954. Love's version includes a reference to Kent State:

"America was stunned on May 4, 1970
When rally turned to riot up at Kent State University
They said the students scared the Guard
Though the troops were battle dressed
Four martyrs earned a new degree
The Bachelor of Bullets"

While there has always been a need for escapism in entertainment there was a time when pop music made people think. We need some of that thoughtfulness again.