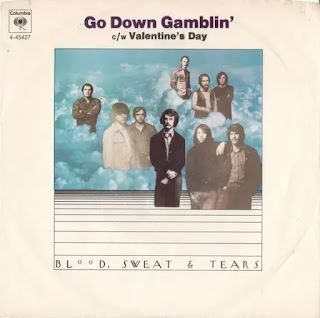 The problem with Blood, Sweat & Tears was that many rock fans didn’t consider them to be a real rock band. Their guitarist, Steve Katz, never reeled off the flaming, red hot, twelve-minute, guitar jams that were so popular at the time. Eric Clapton, he was not. Jazz purists didn’t believe the band was the genuine article either. The rest of us, the people who actually bought their records, didn’t much care either way.

Nevertheless, most listeners were surprised when singer David Clayton-Thomas picked up his electric guitar for "Go Down Gamblin,'" way back in 1971. The Clayton-Thomas/Fred Lipsius (alto sax and piano) composition was definitely the loudest rock track the group ever put on vinyl. With their singer rocking out at full throttle, and playing some heavy guitar riffs, the song sounded more like something from Chicago Transit Authority than anything Blood Sweat & Tears ever recorded.

The song is about a gambler who never wins at any game he plays, yet he doesn’t feel like a loser because even though the "cards are 'bound to break me I've been called a natural lover by that lady over there." So, in the protagonist's world, all is well.

Unfortunately, "Go Down Gamblin" didn’t do a thing for the band's reputation. It still wasn’t hard enough for the rockers and it was an additional excuse for the jazzers to write them off completely.

The hitmaking lineup of the group began disintegrating right after this record was released and Blood Sweat & Tears, despite hanging around for years, was never a viable commercial force again.