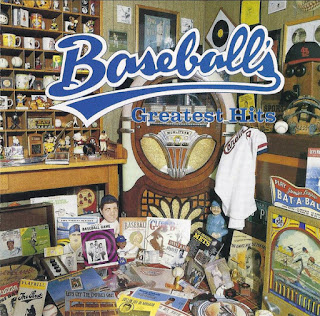 Major League Baseball has been put on hold, so for those of you who need a fix it's time to salute the sport that used to be America's pastime with some music.

The appeal of Baseball's Greatest Hits (1989) lies almost exclusively with hardcore baseball fans and those who like to bask in its history. It's an interesting and informative artifact but not something a listener would routinely pop in his CD player (if you still have one) on a regular basis because it's a collection of novelty songs that are mostly really, really old.

The album has twenty-two tracks that are predominantly songs but it also includes a handful of spoken word radio broadcasts and comedy bits. Among the latter are museum pieces such as Abbott & Costello's famous "Whose On First" (1945), "Lou Gehrig's Farewell Speech" (1939), and "Bobby Thomson's Shot Heard 'Round The World" (1951).

Also featured is actor and vaudeville star DeWolf Hopper who recorded "Casey At The Bat" in 1909. Hopper recited the poem live around 10,000 times and he left us with the ancient and way over the top version you'll hear below. The remastered sound on it is truly astounding.

Among the obvious musical choices are Terry Cashman's "Willie, Mickey & The Duke" and "A Dying Cub Fan's Last Request" by the late Steve Goodman, a hysterical tale about the Chicago Cubs who hadn't won a World Series since 1908 when he recorded this song in 1981. The folk singer's funny classic has lost some of its luster now that the Windy City's National League team won its first championship in 2016 after 108 years.

Other selections include "Take Me Out To The Ballgame" by Doc and Merle Watson, the Gamble and Huff penned "(Love Is Like) A Baseball Game" by The Intruders from 1968, and "Did You See Jackie Robinson Hit That Ball?" a 1949 novelty tune from Count Basie and His Orchestra.

Lots of fun for those who love baseball and nostalgia.