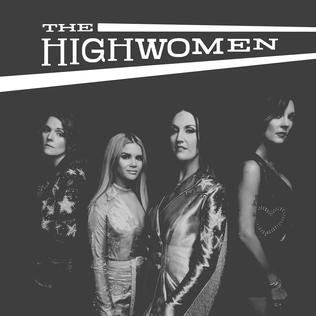 Amanda Shires was not happy as she toured the country in support of her latest album back in 2016. She noticed the obvious lack of women artists being played on country radio nationwide and decided to do something about it. The result was this eponymous debut album by The Highwomen, the supergroup she organized hoping to give the women of country music a higher profile.

Accepting Shires invitations to join her were Natalie Hemby, Maren Morris, and Brandi Carlile, all established country stars with their own careers.

The ladies took their name, The Highwomen, from the similarly named all guy supergroup who got together in 1985 as the Highwaymen, famous for its lineup of Johnny Cash, Waylon Jennings, Kris Kristofferson, and Willie Nelson. It's hard to put together a band with more star power than one involving those four legends but that doesn't mean you shouldn't listen to this excellent set of songs.

This highly collaborative album includes a lot of social commentary which doesn't help get your work played on the country radio these days so, it remains to be seen if Shires achieves her goal. Case in point is "Redesigning Women," written by Hemby and Rodney Dale Clawson, a song that discusses the daily lives of working women:


"Running the world while we're cleaning up the kitchen
Making bank, shaking hands, driving 80
Tryna get home just to feed the baby
Skipping the bread for the butter
Changing our minds like we change our hair color
Yeah, ever since the beginning
We've been redesigning women ."

The title track is another song mining the same subject matter that reinforces the foursome's desire to work outside of country's safety zone.

Carlile, a member of the LBGTQ community, is the lead singer on "If She Ever Leaves Me." It tells the tale of an interested male suitor who has no chance of winning the love of the protagonist's partner because if the relationship ever ends it won't be for him, but for another girl. The track was written by Shires and her more famous husband, Jason Isbell, and it's another example of the quartet's teamwork and their willingness to stir the pot.

If these stellar songs don't get on the radio it's because of the subject matter, not because The Highwomen don't know how to make good music.

When all the voices work together the twelve song album is pure, four-part harmony, country bliss.