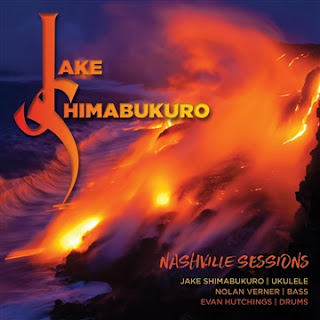 Don't let the title of Nashville Sessions fool you. Ukulele virtuoso Jake Shimabukuro, and his sidemen, bassist Nolan Verner and drummer Evan Hutchings, did not record a country album even though its eleven songs were recorded in the city that is home to The Grand Ole Opry.

Instead, Shimabukuro entertained us with a prog-rock set that used all kinds of electronic devises to make his ukulele sound like a rock 'n roll guitar.

The talented, native Hawaiian of Japanese-American blood is best known for astonishing, solo acoustic, cover versions of Queen's "Bohemian Rhapsody," Judy Garland's "Over the Rainbow, and The Beatles' "While My Guitar Gently Weeps." It was George Harrison's song that made Shimabukuro famous back in 2006 when, unknown to him, a video of his performance of it was posted on YouTube. It was among the earliest of the enormous website's videos to go viral. (Harrison, by the way, loved the ukulele, and even played it on his final album, Brainwashed.)

What is amazing about Shimabukuro is the boundaries he crosses and the chances he takes with an instrument that is often not taken seriously. He can play bluegrass, jazz, rock, blues, flamenco, folk, even classical.

On Nashville Sessions Shimabukuro broadened his palette again. This time he offers us a mostly prog-rock set of original tracks on which he alternately makes his instrument sing like a bird and sting like a bee.

The trio entered the studio without having any previously written material. They laid down all eleven tracks during the sessions and mostly jammed for six days.

Shimabukuro told Guitar Player Magazine, "When recording an album, I'm normally very conscious of keeping a ratio of at least 75 percent natural uke sound to 25 percent with effects," he continues. "On this record it's practically flipped." Those effects include overdubbing baritone, tenor, and soprano ukuleles, reverb, distortion pedals and other electronic gimmicks used by your typical rock guitarist to obtain the sounds you'll hear on the finished work.

At times you'll hear echoes of Robert Fripp, Steve Howe, and Jimi Hendrix, along with some traditional ukulele playing. On "Ballad" the band takes it easy, relaxing over a smooth bed of strings suitable for sunning yourself on a quiet Hawaiian beach. On "Triton," an excerpt from Byron Yasui's "Ukulele Concerto," "6/8," "Hemiola Blues," "Kilauea," and "Galloping Seahorses," you'll find many of the prog-rock and jazz fusion influences that are all over this disc.

The end result is a varied and worthwhile excursion into modern instrumental music but, admittedly, Shimakuburo's experimentation may not be for everyone.

As a bonus, the final video below is Shimabukuro's soothing version of "Over the Rainbow" that is not included on Nashville Sessions.