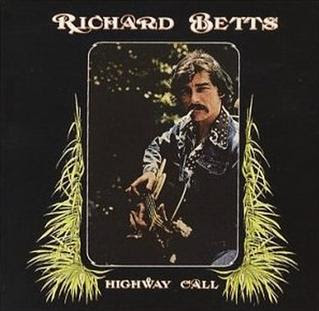 After Duane Allman died, it could be said that Forrest Richard (Dickey) Betts saved The Allman Brothers Band. He was responsible for four of the seven songs on Brothers and Sisters, their first album without brother Duane who passed away in a motorcycle accident before their previous album, Eat A Peach, was completed.

Betts was the man who brought the country music influences to his famous outfit. He wrote and sang lead on "Ramblin' Man," the only Allman's single to ever crack the top 10. The smash hit soared to #2 and was only kept out of the top spot by Cher's "Half Breed."

What is probably the band's second most famous song is also on Brothers and Sisters. It's the rollicking, seven and a half minute instrumental, "Jessica," also written by Betts who was listed at #58 on Rolling Stone's list of the 100 greatest guitarists of all time.

With Betts performing at the top of his game he decided it was time to make his first solo record and Highway Call was the result.

If you're looking for a description of this short set you could say it's a blending of "Ramblin' Man, "Jessica" and Asleep at the Wheel. It includes everything Betts does best and there isn't a hint of the Allman Brothers' heavy blues-rock to be found.

Side one features four country-rock songs, with emphasis on the country, all with lead vocals by the star. Side two is entirely instrumental and is mostly a showcase for "Hand Picked," a tune that clocks in at over fourteen minutes. Kissimmee Kid" written by fiddle player, Vassar Clements, closes out the record.

Betts' lyrics celebrate the country life in all of its perceived glory and there are hints he prefers it to his life on the road.

The instrumentals on the second side are just good time country-jazz and Chuck Leavell, the pianist who replaced the god-like, slide guitarist Duane in Betts' main gig, displays his outstanding chops with some sweet solo work that rivals his superb playing on "Jessica." Clements fiddle virtuosity takes the sessions to an even higher plateau and Jon Hughey's pedal steel work almost pushes the star off to the sidelines. Betts' own fretwork is always pleasing too.