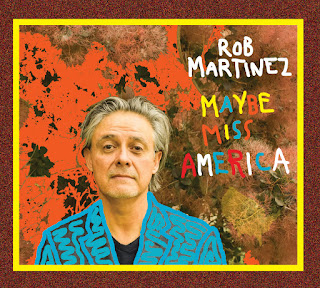 Maybe Miss America is the third album by power pop devotee Rob Martinez. It's a solid effort that is great for cruising in your convertible with the top down and the volume turned up high on a sunny, summer afternoon.

The CD was produced by Adam Marsland who has worked with other pop oriented rockers including former Beach Boy David Marks. Marsland gave the eleven song set a loud wall of sound without losing sight of the melody or the pop atmosphere these songs were meant to have.

Maybe Miss America is definitely a throwback record. It's a hybrid of Sgt. Pepper's Lonely Hearts Club Band and post-Pet Sounds Beach Boys, meaning it's psychedelic pop-rock that keeps the listener tuned in from start to finish. "Summer of Love," one of the album's highlights, has both of these ingredients.

The rocker composed or co-wrote all of the songs on the disc and everyone of them, especially "Sacrifice," "Free," and the title track will make you smile at least a little.

Martinez's vocals are often multi-tracked and his buoyant harmonies are supported by Marsland and singer Marisol Ricacho.