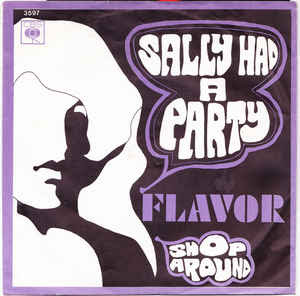 Hey oldies fans! Did you ever wonder what a record would sound like if you took Spencer Davis Group's "Gimme Some Lovin'" and included a couple of bars stolen from Fantastic Johnny C's "Boogaloo Down Broadway?" If that combination sounds plausible to you then you've probably heard "Sally Had A Party" by Flavor, a one-hit wonder who hailed from the Washington D.C. area.

Information on how well the single performed is spotty. It did well on a top 50 survey from radio station KLMS in Lincoln, Nebraska where it placed at # 10 for the week of July 20, 1968. It was also in regular rotation on my local top 40 station, WFIL, Famous 56, in Philadelphia that summer so "Sally Had a Party" was much bigger in certain markets than it was nationally. According to Joel Whitburn's Record Research it debuted on the Hot 100 on August 3, 1968, climbing no higher than #95 in a five-week run.

As the song's title suggests "Sally" is the perfect 60s party record but it will probably sound dated to modern, young, music fans because the arrangement, production, and vocals are obviously of their time.

I still have the copy I purchased way back when and if I owned a jukebox it would become the permanent home to this fine piece of garage pop. The flip side is a rather lame version of The Miracles' "Shop Around" but the A-side couldn't be cooler.

Since Flavor was signed to Columbia, one of the major labels at the time, somebody must have believed the group was headed for the big time but, as we all know, stardom doesn't always happen.

There is very little information available on Flavor but it is known that the trio's guitar player, Demetri Callas, later became a member of The Four Seasons touring band.

SPECIAL NOTE: Thanks goes out to J. A. Bartlett of The Hits Just Keep On Comin' for his research assistance with this post.