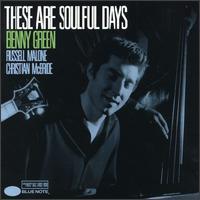 Jazz pianist Benny Green assembled a trio for These Are Soulful Days, an end of the century release with a lineup identical to Nat King Cole's great trio of the 1940's. In both groups the leader played piano while accompanied only by electric guitar and bass. Neither outfit employed a drummer, but let it be known that the similarities end there.

Green's group is strictly instrumental and plays hard bop from the late 50's and 60's while Cole's played light swing, had a more pop feel, and relied heavily on his magnificent vocals. (I always preferred Nat King Cole's singing to Frank Sinatra's, but that is getting off the subject).

The lack of a drummer does not stop the versatile Green and his sidemen from generating a great groove. The listener doesn't even notice these recordings lack drums, and it is the belief here that their presence would not have added anything to the sessions. All eight tunes are melodic and varied enough to keep the set from sounding redundant.

Not strictly a piano recording, guitarist Russell Malone and bassist Christian McBride get plenty of room to shine.

This disc was recorded as part of Blue Note's 60th anniversary celebration. Other Blue Note artists previously recorded all of the music heard here. Fans of piano jazz should enjoy the trio's excursion through the renowned jazz label's archives.