This is a reprint of a post that first appeared on Bloggerhythms in 2005, the year of its inception.

The controversial Michelle Shocked has always been one of my favorite singer-songwriters. She hasn't released an album since 2009, possibly due to some controversial comments she made during one of her shows in 2013.  Her recording career appears to be at a standstill even though she still tours.

It should be noted that The Point, the venue where the concert below was held, no longer exists. 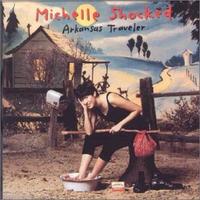 The very eclectic and very entertaining Michelle Shocked played at The Point, an intimate and wonderful coffeehouse style venue in the Philadelphia suburbs this past Saturday night, and just as I hoped for she played a superb and very entertaining set of music. The evening’s performance was a big surprise because it was almost totally devoted to her recently re-released, previously long out of print, 1991 classic CD, Arkansas Traveler. All the songs in the eighty-five minute performance except for the two encore pieces were from this terrific disc.

First, we need to start with some history about Arkansas Traveler. Chris Woodstra of the All Music Guide wrote "Part three of the trilogy that began with Short Sharp Shocked, Arkansas Traveler focuses on American roots music of the South, mainly rural-blues and country. According to her theory in the album's liner notes all of these songs are based on the legacy of blackface minstrels. Recorded with a mobile studio at various non-conventional locations around the country, it features an amazing array of guest musicians including Pops Staples, Doc Watson, and Gatemouth Brown." Allison Krauss, Levon Helm, Garth Hudson, Jerry Douglas and Bernie Leadon also appear on the disc.

Throughout the evening Shocked either played solo guitar or, when accompanied by another guitarist, she mostly played mandolin. The audience was totally engaged in her performance because she "demanded" full audience participation on several songs or she would stop the show. (I would bet the house that she was joking but considering this is an artist that once refused to go on stage because her audience was not "diverse" enough, who knows). For the title cut Shocked invited participants to come on stage and help her perform the song. Their job was to read the set up lines for several bad hillbilly jokes inserted into the middle of this "start and stop" style song while Shocked answered with the punch line. For "Hold Me Back (Frankie and Johnnie)" audience members acted out the parts of the song on stage. She repeatedly asked people to come and play guitar with her and eventually found one woman gutsy enough to play with a professional career musician onstage.

Shocked made her left-wing politics very well known even while she talked about trying to avoid heavy proselytizing throughout the performance. Her sense of humor makes her politics sound less preachy and her devotion to serious causes is what makes the onstage silliness avoid hokiness. Yet according to her autobiography in Jams, her self-published political magazine that she gives away at her concerts, she always wanted to be an activist first and a musician second.

Shocked did nine other Arkansas Traveler tracks including favorites "Come a Long Way," "The Secret To A Long Life" and "Strawberry Jam." The encore included her most well known and probably her best loved song, "Anchorage" before she closed out the concert with "Memories of East Texas" both from Short Sharp Shocked.

If Michelle Shocked comes to your town you need to see her and you must give Arkansas Traveler a very serious listen.

Find out more about this great singer-songwriter at her website.