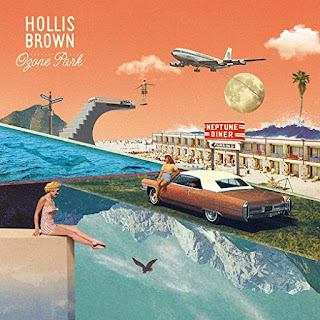 Hollis Brown is a hard band to characterize. They're undoubtedly a modern rock group but they have a touch of classic rock seeping into their souls. Their most recent release, Ozone Park, employs digital drums and synths but they never forget a real rock band needs a live drummer (Andrew Zehnal) and a great electric axeman. The latter is more than ably supplied by Jonathan Bonilla.

Although there is no rap on this album, lead singer Mike Montali says Hollis Brown is inspired by hip-hop, funk, singer-songwriters, and much more. Their name is derived from an early Bob Dylan song, "The Ballad of Hollis Brown," even though they sound nothing like the uber-famous, folk-rock legend.

The New Yorkers' influences abound but they mix them all together into their own cohesive, identifiable image and sound. Much of that credit goes to Montali who not only sings with great emotion, he also possesses the necessary frontman swagger all top flight rockers need to connect with a live audience.

Ozone Park, takes its name from their home turf in Queens, NY and accomplishes exactly what Montali and his friends set out to do.

From the band's website: "We really feel like the last of the great American rock bands," Montali explains. "When you play rock music it's always kind of a hurdle to not be considered a retro band or a throwback band because somebody is always trying to put you in a box or define you. You're always compared to another artist, another band -- who are great, sometimes, but they're...old. I think we want to make a statement that rock music can still be done in a modern way that is still as good as some of those acts from the past." If Hollis Brown is not the last great rock band they are doing everything they can to keep the once thriving genre permanently off of the endangered list.

Starting with the arena rock of "Blood From A Stone" the group moves on to "Stubborn Man" a track you can imagine Otis Redding turning into a hard driving, soul, barn burner. The radio friendly "She Don't Love Me Now" and the riff heavy "Do Me Right, the first single," succeed where much of today's rock 'n roll does not.

Things calm down midway through the ten song set with the brief instrumental "After The Fire" that segues into "Forever In Me," proving Montali can also handle ballads effectively when called upon. Then the band comes roaring back with "Someday Soon," another track that could be a hit single. 70s, soft rock radio would have made sure "That's The Way She Does It" played it's way into the top ten. Then comes the record's loudest track, the fuzz box infused "Bad Mistakes" and the finale "Go For It." Either one would make a great concert closer.

Montali, Bonilla and Zehal are supported by bandmates Adam Bock (keyboards), and Chris Urriola on bass.

Straight ahead rock 'n roll with no gimmicks has been on life support for a long time now. Fortunately, Ozone Park proves it's still too early to pull the plug.